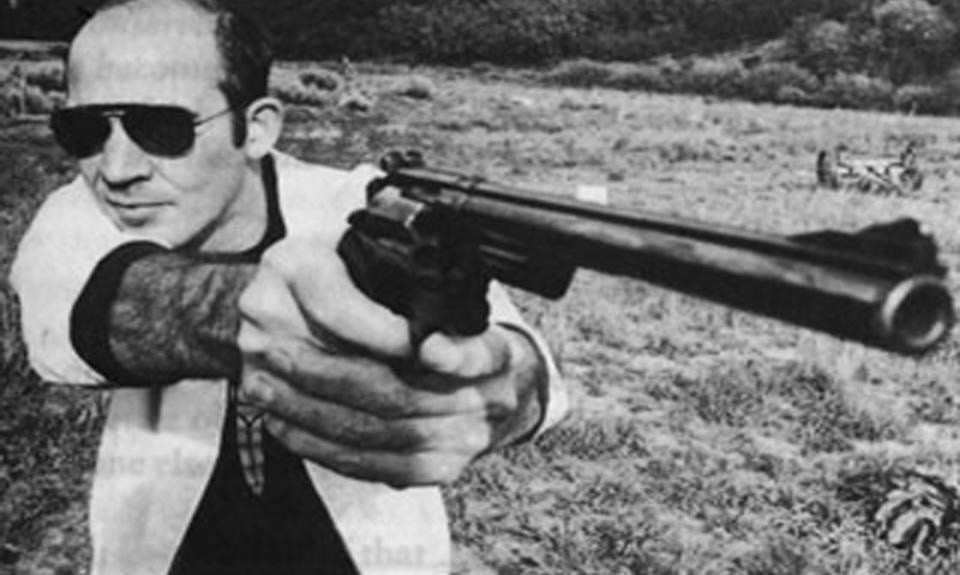 If Dr. Hunter S. Thompson could be described with one word, it would be a word he created himself — a word that somehow encapsulates the drug-induced and drunk first-person journalistic/fictional brilliance he exhaustedly punched out on his typewriter …

But way before he made his wild, indelible mark on the American psyche with his signature bucket hat, long cigarette holder, sunglasses, Chivas Regal and whatever else he was under the influence of (not to mention such masterpieces as Fear and Loathing in Las Vegas and The Kentucky Derby is Decadent and Depraved among many others), he was an airman in the United States Air Force.

Of course, he only lasted a few years before he was honorably discharged in 1958, but he did exit the military with a fantastic summation of his service from his commanding officer, something that foreshadowed the illustrious and completely unique writing career that would follow:

“In summary, this airman, although talented, will not be guided by policy.”

“Sometimes his rebel and superior attitude seems to rub off on other airmen staff members.”

Now you may think that taking advice from a late madman author (he took his own life in 2005), someone who routinely burned down his Christmas tree, isn’t a wise decision.

But think again. Because there was a method to Hunter’s madness, and all you have to do is read a few lines from his lauded pieces to realize that while he was very often a balding bull in a china shop, he was so because that’s what he wanted to be. He achieved what so many Americans dream of achieving: he did whatever the hell he wanted to do and, in the end, got rich and famous in the process.

Here’s a few of his guiding lights, from his home office in Woody Creek, Colorado (and/or the local bar there):

There’s a lot of media out there in today’s modern internet landscape. While Thompson didn’t live long enough to see the reign of entities like Twitter and Facebook and the like, he was ahead of the curve on proclaiming that no one can ever be absolutely straight with you when handing you the news. It’s not humanly possible.

This from Fear and Loathing on the Campaign Trail ’72:

With the possible exception of things like box scores, race results, and stock market tabulations, there is no such thing as Objective Journalism. The phrase itself is a pompous contradiction in terms.

Don’t be stubborn either. Things change — you have to be willing to change along with them.

Rip the Band-Aid Off, Then Do Something Else

Thompson realized from a very early age that life isn’t that long (as the adage goes) and so it makes no sense to wait forever to make a decision then despise yourself over it. He put the advice succinctly in a letter to one of his friends, Hume Logan.

A man who procrastinates in his choosing will inevitably have his choice made for him by circumstance.

Not only is he saying you should just be tough and get it over with, but that in failing to do so, you inevitably relinquish control. And who wants to lose that?

Live How YOU Want to Live

If Thompson was a master of anything (aside from writing) it was living — his way. And by his rules (for the most part). In the same letter to Logan, he spells out a fascinating view of how you should go about this in life, and dispels the whole “setting goals” school of thought that tends to dominate.

So if you now number yourself among the disenchanted, then you have no choice but to accept things as they are, or to seriously seek something else. But beware of looking for goals: look for a way of life. Decide how you want to live and then see what you can do to make a living WITHIN that way of life.

Another way to look at it is you’re basically consolidating goals into one, then mapping out the steps you need to take to grab that ultimate trophy.

A quiet, steady life will make you happy. Right?

Thompson didn’t believe this whatsoever, and subscribed to living fast rather than existing slow. Not a surprise if you know who he was, but we think he has a point. Often times, frustration and anger and depression can mount if you’re not changing it up enough — stuck doing the same things for years on end. Many would argue it’s bad for the soul.

Thompson argues with two sage and mellifluous lines from The Proud Highway and Kingdom of Fear, respectively:

So we shall let the reader answer this question for himself: Who is the happier man, he who has braved the storm of life and lived, or he who has stayed securely on shore and merely existed?

Some people will tell you that slow is good – but I’m here to tell you that fast is better. I’ve always believed this, in spite of the trouble it’s caused me. Being shot out of a cannon will always be better than being squeezed out of a tube.

Sounds so much better than “get out of your comfort zone!” Doesn’t it? The old airman definitely had a way with words.