It may be called the Malheur National Wildlife Refuge, but since the clan of misfit American “constitutional” extremists occupied it this past Saturday in wobbly protest, it’s suddenly become apparent that it’s no longer a government-funded safe haven for animals, but rather a paltry-stocked beehive buzzing with some of the most asinine and pathetic stolen valor candidates.

His name is Brian Cavalier, 44, (pictured above and below), and he’s the supposed “bodyguard” of ranchers Cliven and Ammon Bundy — the two leaders of the bumbling brigade of dissent and occupation in the land near Burns, Oregon. 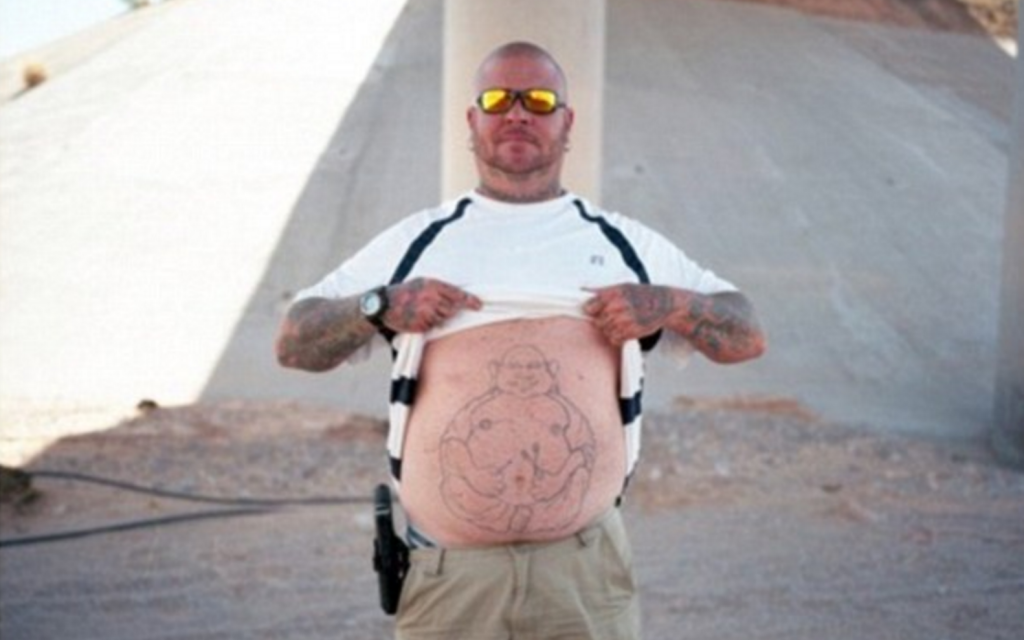 Cavalier has boasted to reporters since the weekend that he’s a retired United States Marine who’s served in both Iraq and Afghanistan.

And guess what? He’s not. He’s a tattoo artist with a penchant for driving drunk — and getting arrested.

This from the Daily Mail:

… despite his self-styled military image and his heavy use of military phrases, we can reveal Cavalier is in fact a tattoo artist with a long rap sheet for DUI and theft, not a former soldier.

According to police records, Cavalier, from Arizona, has been arrested several times for DUI and one case of ‘extreme DUI’ in Arizona.

Since the armed occupation of the wildlife refuge Cavalier has refused to reveal his identity to members of the press.

He told journalists that he simply goes by the name “Fluffy Unicorn”.

When Daily Mail Online visited the refuge on Monday Cavalier joked that he might change it to ‘Raging Unicorn’ – because he was irritated by our questioning.

Then he made his false declaration.

“I’m a retired United States Marine, I can rage,” he said, before dropping in that he had served in Afghanistan and Iraq.

During several encounters with Cavalier – who on one day wore a hat with a badge stating ‘major league sniper’ on the front – he gave off an air of a long-time serviceman.

When our reporter asked about accessing the refuge building, he barked: “No that’s logistical security issues that we can’t have happen, head count can’t be divulged for security purposes.”

Cavalier was eventually confronted with questions regarding suspicions — and facts — that he was thieving valor; the USMC itself denied he was ever a Marine.

He simply shrugged it off with little comment and said it was unfortunate and “is what it is”.

To us, it’s proof once again that these guys have long since slipped deep within their own delusions, and in a lot of ways, are fighting not the United States government, but some Freudian dilemma within their own psyches, fueled by personal shortcomings and failures that happened once upon a time in reality.

They’re what the Chinese call “paper tigers” — and the Americans call “fools”.