If you’re going to lie about being a hero — a military man or woman who’s put their life on the line to save others, don’t.

Put some effort into it.

An Australian wannabe soldier/military phony Dave Harper DIDN’T put any effort into a Photoshop job he hoped would convince people on their phones and laptops and iPads that he was once a courageous man who had been awarded a bravery medal — the Military Cross — for serving in Northern Ireland with the Parachute Regiment back in October, 1969.

All he did (ALL he did) was haphazardly paste his ugly mug on a photograph of REAL Lance Corporal Alfie Pope with a medal he’d receive, in real life, at Buckingham Palace in 2012. From the hands of the Prince of Wales.

He was eventually found out and exposed by The Walter Mitty Hunters Club, in this post (complete with the terrible original Photoshop job Harper was trying to pawn off): 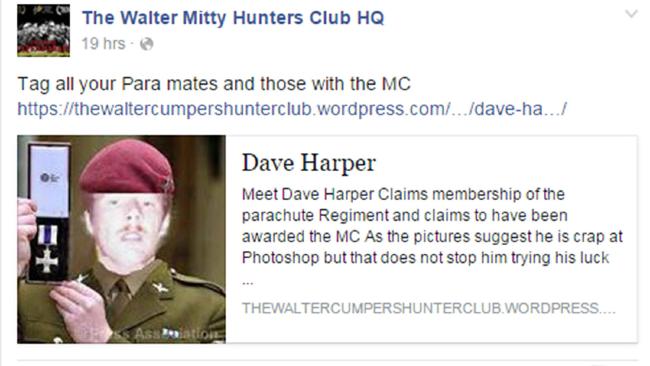 He even tried to assuage the crappy artistic take with a caption that further offended.

This from News Corp Australia:

In broken English, he wrote: “Some old photo’s I found in old envelope. Most of my belongings where destroyed when my Aunts house was burned very badly. I had forgotten about them.

“Bloody horrible photo when I look at it, never used to wear my Beret like that normally, I look retarded.”

But the terrible edit managed to fool one of Harper’s friends.

James Harmer wrote: “You have gone up even further in my estimation.”

The picture was dated 26 October, 1969 — when it is thought there were no medals awarded, and also those sort of snaps would have not been in printed in colour.

Fellow Walter Mitty hunter Mark McKendry wrote: “A blind man could have made a better job of that photoshop.”

Steve Edward added: “How could anyone have been fooled by that ‘Photoshop’ effort? You can almost see the sellotape.” 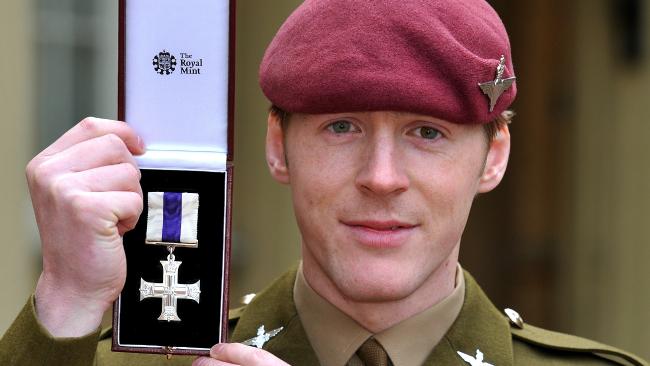 Harper has since come clean about the incident.

Here’ what he wrote to the Mitty club:

“I would wholeheartedly like to apologize for my complete and utter stupidity in making the postings, as far as I was aware these where all deleted from my Facebook page in 2013, I have been through my Facebook timeline and can find no trace of any of these posts.

“It was an idiotic thing to do, I had been going through a rough period as I had just lost my wife and also my pet dog.

“I know that is not a very good excuse. I am extremely sorry for all the anger and distress I have caused and I can guarantee nothing like this will ever happen again.”