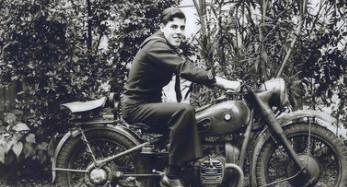 Warren Hotard is color blind. As the United States entered WWII, Warren’s three older brothers each enlisted for military service, but the Coast Guard refused Warren for regular duty. Eager to enlist and not phased by something so slight as a denial of entry, Warren twirled his way into the military. Literally.

As a high school student in 1940s New Orleans, Warren was a band member and a national baton twirling champion. Warren used his award-winning baton twirling skills to earn a top spot on the Coast Guard’s band as the drum major. But, the band was no battlefield and Warren yearned to serve his country on the front lines.

While serving as the Coast Guard Band’s drum major, Warren one day came across a bus boarding Coast Guard service members that had no identity verification process. Seeing this as his chance to serve his country, Warren simply walked onto the bus and went to basic training.

Not as much attention was paid to things like identification and who boarded the bus as in today’s world, so I just went off to war, which is what my goal was anyway.

It is unclear how he was able to stay on as a regular duty sailor in the Coast Guard, or if his subversion ever resulted in any discipline. What is clear is that his incredible tale had only just begun.

Warren trained as a support personnel for the Landing Craft Infantry LCI-320 ship in Virginia, Bermuda and North Africa. His ship carried soldiers and supplies into war, invading Sicily, Salerno and, on June 6, 1944, Normandy. While in Normandy, Warren acquired an orphaned German combat 1942 BMW motorcycle.

After the war ended, Warren went home to New Orleans with the motorcycle, became a paint salesman and started a family. Warren’s company transferred him to Mississippi and he entered the U.S. Naval Reserve

When the Korean War began, Warren served two years in the Pacific on an escort destroyer doing maneuvers with aircraft carriers. After his service in Korea, Warren’s paint sales job brought him back home to New Orleans, where he finally settled down.

In 2008, the National World War II Museum asked Warren be the veteran representing all American veterans during the Museum’s annual tour to Normandy in 2008. Warren accepted. Today he is a retired widower, living in a quiet New Orleans suburb, not far from his two grown sons.

If you would like to read Warren’s full interview, his story was originally reported on NOLA.com.

Thank you for your service, Mr. Hotard, and for the inspiration of a life well lived.