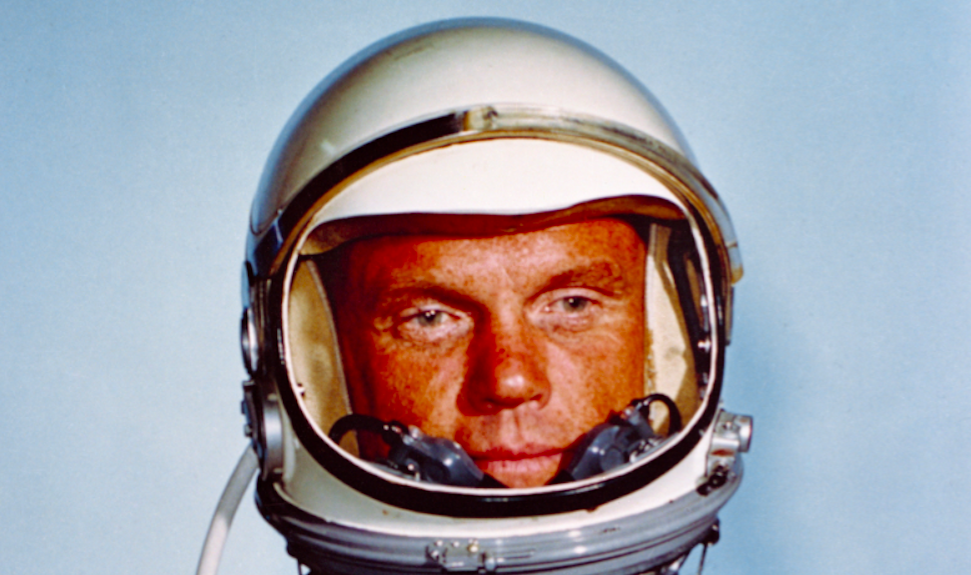 Glenn had recently been hospitalized. He received a heart valve replacement in 2014 and shortly thereafter suffered a stroke.

The Ohio native enlisted in the military a few days after the attack on Pearl Harbor in 1941, as a cadet in the Naval Aviation program. Upon graduation, he joined the Marines, and flew as a fighter pilot in the Pacific Theater in the Second World War. He was eventually awarded two Distinguished Flying Crosses for his efforts.

A few years later, he flew missions in the Korean War — 90 combat ones to be exact — and was awarded with yet more medals for his valor (he was also sBoston Red Sox great and fighter pilot himself, Ted Williams’ commander).

In the mid-1950s he served as a test pilot for the military (he made the first transcontinental supersonic flight in a F8U-1 Crusader) before applying to be a part of the National Aeronautics and Space Administration in 1959.

He, along with six other test pilots, got the job.

This, from The New York Times obituary of the famous patriot, and the moment that defined his and, in a way, America, in the latter half of the twentieth century — 9:47 a.m. Eastern time on February 20, nearly 55 years ago:

It was an anxious nation that watched and listened that February morning, as Mr. Glenn, 40 years old, a Marine Corps test pilot and one of the seven original American astronauts, climbed into Friendship 7, the tiny Mercury capsule atop an Atlas rocket rising from the concrete flats of Cape Canaveral in Florida …

… It was a short flight, just three orbits. But when Mr. Glenn was safely back, flashing the world a triumphant grin, doubts were replaced by a broad, new faith that the United States could indeed hold its own against the Soviet Union in the Cold War and might someday prevail.

No flier since Lindbergh had received such a cheering welcome. Bands played. People cried with relief and joy. Mr. Glenn was invited to the White House by President John F. Kennedy and paraded up Broadway and across the land. A joint meeting of Congress stood and applauded vigorously as Mr. Glenn spoke at the Capitol.

In his political history of the space age, “…The Heavens and the Earth,” the author Walter A. McDougall described Mr. Glenn’s space mission as a “national catharsis unparalleled.”

“It seemed that he had given Americans back their self-respect,” Mr. McDougall added, “and more than that — it seemed Americans dared again to hope.”

Too beloved an American to risk sending back into space (according to John F. Kennedy) Glenn left the space program in 1964 and started a career in the private sector. He followed it up with a lengthy political career — he was a senator from Ohio from 1974 all the way up to 1999.

Glenn is survived by his wife and two children, as well as two grandsons: Daniel and Zach Glenn.