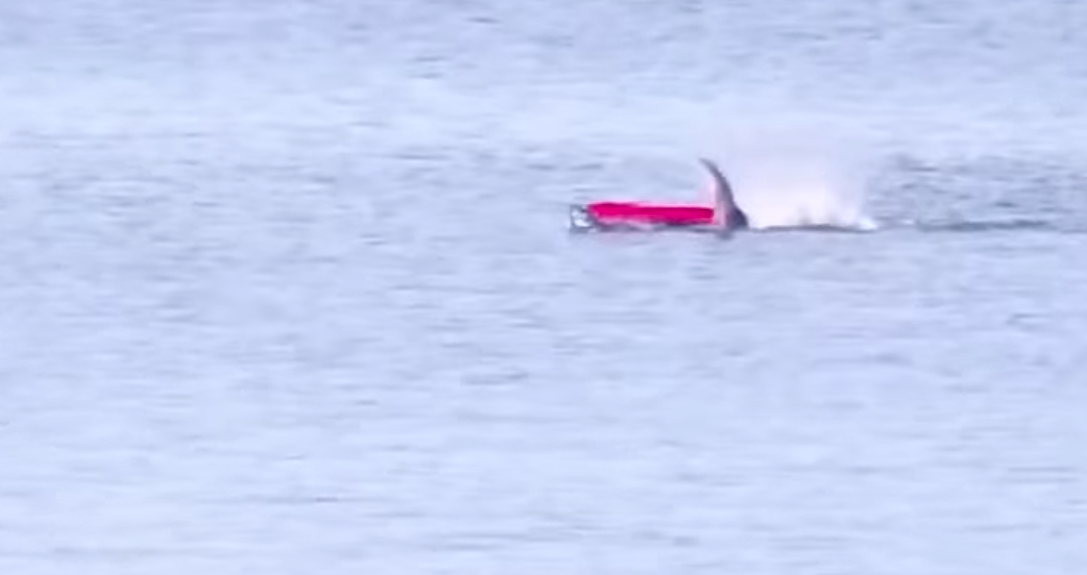 The United States Coast Guard is, often times, the only hope for boaters, swimmers, surfers and any other human who faces danger out on the high seas.

The military branch rescues those struggling to survive rough conditions, people who fall overboard and, yes, even poor souls on the verge of being devoured by a man-eater.

Recently released footage (embedded below) from March is exhibit A, as a samaritan caught on live video documents a kayaker in Monterey Bay, California being attacked by the most fearsome predator in the ocean.

This from FOX 31 via National Geographic:

“It all started with a bang,” Brian Correiar said in an interview with National Geographic. “Suddenly, the kayak was launched into the air and I fell halfway out of it.”

Then the shark bit into his 14-foot kayak, just 3 feet from him, Correiar told NatGeo.

Correiar said, at first, he was frozen in shock. But Correiar, an experienced scuba instructor, knew what he had to do.

Correiar told NatGeo he scrambled out the kayak, flipped onto his back so he could keep watching the shark and started kicking toward shore.

“The shark proceeded to munch along the entire length of the kayak while never leaving the water’s surface, easily rolling it over length-wise like a toy,” NatGeo reported.

Correiar used his Nautilus LifeLine Marine Rescue GPS to try to call the Coast Guard for help, but the shark reportedly lunged toward him, with the kayak still in its jaws.

“It was like a horror movie. The shark came toward me, dropped the kayak, then dove straight down below me where I couldn’t see it,” Correiar told NatGeo. “I was sure I was done.”

Just after the camera guy, Gene Mace, stopped filming, a Coast Guard boat showed up on the scene to rescue the kayaker. Tired and in shock, the victim of the near-death experience was “too tired and cold” to climb into the USCG vessel, and needed to be assisted.