Professor After First Class Seat Is Given Up for Soldier: ‘I’m Trying Not to Vomit’

Tears of joy, of course, are a thing. A thing that only occurs when pure bliss and/or laughter summons a human being, and they embrace it with everything in their heart and mind.

“I’m so happy I could cry” is an exclamation that people say, and most of the time, they’re being completely earnest when they do.

“I’m so happy I could … vomit”, however, is not something people say.

With this bizarre context in mind, read the following tweet from a notorious rabble rousing college professor: 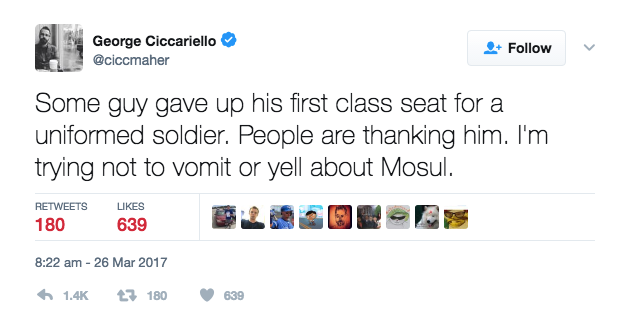 Put away the fact, for a second, that this academic has a long history of publishing troll-like, inflammatory statements on social media. Do insert the fact, however, that while he sat in his plane chair, on the verge of a puke, he did not enter his opinion into the real-life forum as it played out before him. He did not speak up. He did not make a noise. Rather, he remained sedentary and silent, thumbed some letters into words on his tiny handheld phone, then ate some peanuts (maybe).

In the more than one thousand replies to the tweet that ensued, let’s just say he heard aplenty from those who held an opposing viewpoint.

He has since blocked any new Twitter friends from following him, and switched his account setting from public to private.