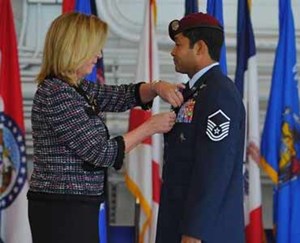 Ruiz is a pararescueman deployed with the 22nd Expeditionary Special Tactics Squadron. On December 10, 2013, he and several U.S. Army Special Forces service members crossed enemy lines to secure a compound in the Kandahar Province of Afghanistan. Ruiz and two of the special ops soldiers were separated from the rest of the team and immediately came under enemy fire. Insurgents shot the two Army soldiers and neither soldier was able to take cover.

Leaving his position, Ruiz moved into the direct line of fire to advance on the enemy alone and provide protective fire for the two injured soldiers. He rushed to rescue the men after reinforcements arrived and pulled both of them to safety. Once all three men were covered from enemy fire, Ruiz performed trauma care that saved the lives of both soldiers.

Ruiz says he was just doing his job and acting on his training.

I didn’t really think, I reacted. Anytime something bad happens in my career, I just fall back on my training. It prepares us for what we can encounter when we are doing our work.

Secretary James awarded the Air Force Cross to Ruiz during a special ceremony on Hurlburt Field, which is part of the Elgin Air Force Base in Okaloosa County, Florida.