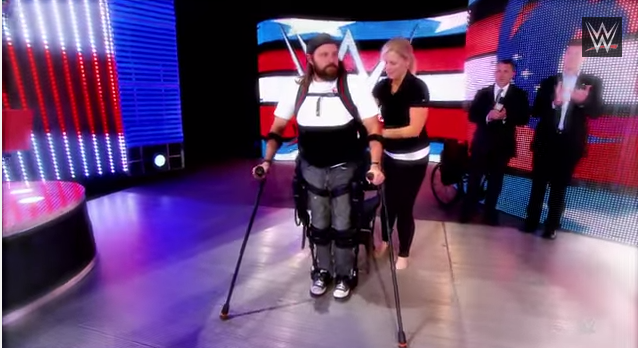 Friday night, the popular wrestling show WWE Smackdown took a moment away from its usual night of brawls and decided to highlight Sgt. Dan Rose, an Army Reserves veteran who was paralyzed during his service in Afghanistan.

Sgt. Rose was in the Army Reserves for 10 years and served in support of Operation Enduring Freedom in Afghanistan until 2011, when an IED paralyzed him from the chest down.

With help from the Ekso Suit coupled with encouraging cheers from the crowd chanting “U-S-A!” Sgt. Rose took his first steps since being paralyzed.

“It was like standing on top of a mountain, just looking down around the world, it’s been amazing,” said Rose.

Check out his story below