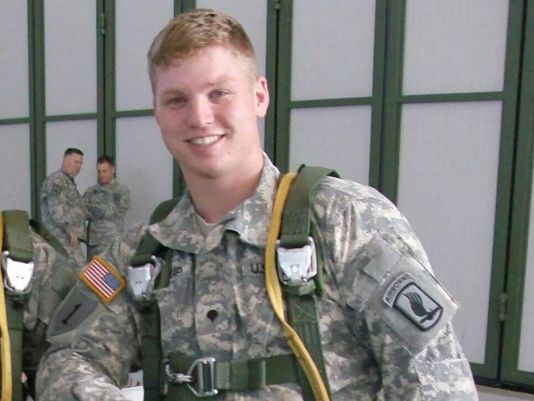 Sargent Franz Walkup served his second tour in Afghanistan in 2012, training members of the Afghan Army. While moving through a checkpoint on September 29, 2012, members of the Afghan forces they helped train ambushed Walkup’s unit. Walkup was shot five times, leading to 78 surgeries to repair his bullet wounds, shattered pelvis and broken leg. The numerous injuries and surgeries would eventually cost Walkup his spleen and most of his intestines, forcing him to relearn how to walk. While he took his first unassisted steps earlier this year, he is still largely wheel-chair bound.

In spite of this, several aid organizations rejected Walkup’s requests for help building a wheelchair-accessible home and his Department of Veterans Affairs request is currently backlogged.

In an interview with WUSA9 News, Walkup said “it’s hard because it kind of feels like my sacrifice wasn’t great enough.”

After returning home from the hospital with his wife, Walkup asked multiple organizations to help him build a wheelchair-accessible home for himself and his wife, who works multiple jobs. Each organization rejected Walkup’s requests for aid. Some reasoned that his injuries weren’t “extensive enough,” such as losing one or more limbs.

Still, the Walkups haven’t lost hope. After picking out a modest and inexpensive plot of land in their Tennessee hometown, they are hoping to raise enough donations to purchase the land and build a modest, wheelchair-accessible home. With the help of numerous donors, many of whom chose to remain anonymous, the Walkups have currently raised just over $36,000.

Sgt. Walkup is not alone in his brave service, however; he is one of four brothers to serve in the armed forces. His older brother, Frank Walkup, was killed in Iraq, three days before his 24th birthday, by a roadside bomb in 2007. We thank all four Walkup brothers for their brave service.

If you would like to learn more about Sgt. Franz Walkup’s journey, the Walkups run a Facebook page to let community members know how Franz is doing. You can also visit their GoFundMePage to watch their fundraising progress and even a video depicting Walkup’s first unassisted steps.