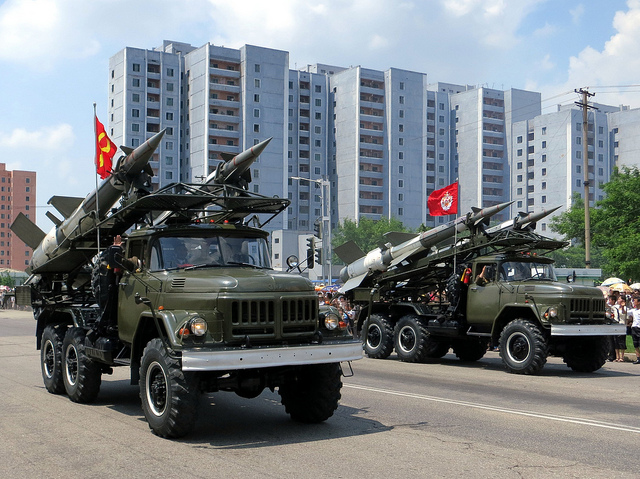 Tension is on the rise after unruly North Korea fired two short-range ballistic missiles into the East Sea in an alleged protest against the annual U.S.-South Korea military drills that kicked off Monday.

The “military-first” country, which is ruled by infamous dictator and self-proclaimed “supreme leader” Kim Jong-un, fired two Scud missiles between 6:33 a.m. and 6:41 a.m. from its western port city of Nampo southwest of capitol Pyongyang – according to officials in Seoul.

The massive projectiles flew 307 and 306 miles respectively, and traveled at top speeds approaching Mach 4.3. Given these facts, Seoul is reporting that they believe there were Scud-C missiles. North Korea also has Scud-B, Scud-D, Scud-ER in their arsenal.

In just the past month Jong-un and the North have escalated military tension, calling on South Korea and the U.S. to scrap their annual drills. A request that was obviously – and for good reason – ignored.

“We believe the launches are a show of force against the Key Resolve and Foal Eagle drills. Our military is keeping close tabs on the North Korean military’s movements and maintaining a robust readiness posture,” Seoul’s Defense Ministry spokesman Kim Min-seok told reporters.

In a statement that came from somewhere within the bowels of North Korean Central News Agency, the wacky wannabe “power” had (per usual) incendiary words regarding the United States and its allies.

“The only means to deal with the imperialist U.S. and its sympathizers is neither dialogue nor peace, but a baptism of fire.”