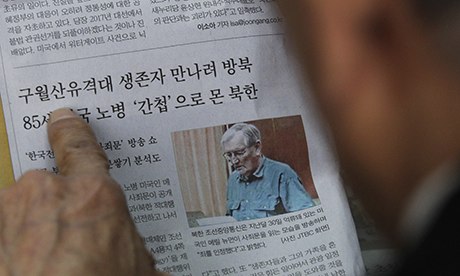 During a 2013 tour of Pyongyang, the capitol of North Korea, Korean War veteran Merrill Newman asked his tour guide for help locating relatives of the anti-Communist guerrillas Newman helped train during the war. He suffers from a heart condition and felt that time would only allow one last chance to pay proper respects to the fallen soldiers he served alongside so many decades ago.

His request was refused. Instead, North Korean officials arrested Newman just after he boarded a plane back to the United States, branded him a spy and accused him of war crimes.

North Korean officials kept the 85-year-old confined to a hotel room on the 36th floor of a hotel perched on a modest North Korean island. Merrill Newman spent over a month under arrest and enduring routine interrogations in the guarded room.

His account of the days spent in captivity, the speech he was forced to read confessing to war crimes, and how he managed to return home to California are detailed in a new book, The Last P.O.W.

Written by journalist Mike Chinoy, the book chronicles Newman’s experiences in North Korea, including his time spent aiding anti-Communist fighters during the war. Chinoy is a Senior Fellow at the USC U.S.-China Institute and a former Senior Correspondent for CNN.

The New York Times recently profiled the book and how it developed from a news headline to a published book.

Chinoy decided to release this published work online but not in paperback. You can currently purchase the book for just $0.99.