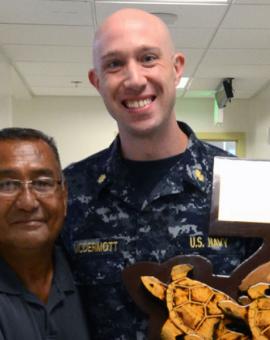 Lt. McDermott and Vietnam vet SanNicolas embrace after the plaque is presented.

Lt. Andrew McDermott, a U.S. Naval Hospital Guam physician, removed a 44 year-old metal fragment from a Vietnam veteran’s abdomen. In a show of thanks, the veteran handcrafted a wooden “thank you” plaque displaying sea turtles and presented it to the grateful doctor.

Retired Army veteran Joseph SanNicolas underwent surgery to remove metal fragments while serving in Vietnam from 1967 – 1969. Yet, he suffered for over 44 years from intermittent pain and, earlier this year, he began to bleed inexplicably. He and his wife agreed- it was time to see a doctor.

Lt. McDermott originally suspected a cyst to be the root of the bleeding and constant pain. However, after listening to SanNicolas’ story and an x-ray, a metal fragment, thought to be removed decades ago, still remained in SanNicolas’ abdomen. The next day Lt. McDermott removed the fragment without complication. SanNicolas says he is pain-free and feels like “a new man.”

His doctor is just glad that SanNicolas is well, but was happy to see his daily work changes the lives of his patients in such a moving way.