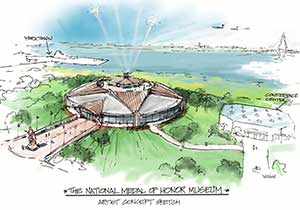 The Museum’s organizers are planing for the 100,000 square foot complex to include an education center, a chapel, galleries, and educational exhibits. For those unable to travel to the South Carolina complex, distance learning capabilities and virtual “field trips” to the museum will be available. In fact, the Museum’s coordinators have kept the latest technology in mind while designing and developing the project’s capabilities. Interactive galleries will allow visitors to “talk” with past and present Medal of Honor recipients.

This museum is not the first of its kind, however. Another similar Museum already operates just off of the Charleston Harbor in Patriot’s Point on the USS Yorktown. Additionally, the National Medal of Honor Museum of Military History in Chattanooga, Tennessee, also recognizes Medal recipients through educational programs and exhibits. Their Facebook page features a different recipient nearly every day.

Since the medal was first awarded in 1963, there have been 3,493 National Medal of Honor recipients including one woman, Mary Edwards Walker. The award is given to military personnel who, among other requirements, “distinguished himself conspicuously by gallantry and intrepidity at the risk of his life above and beyond the call of duty while engaged in an action against an enemy of the United States.”

To learn more about the National Medal of Honor Museum Foundation and how to support the project, visit them online at HOHmuseum.org.