On the Pennsylvania Turnpike, hundreds of drivers were stranded overnight on Friday by raging winds and mounting piles of snow. Some drivers were stuck for as long as 16 hours. Come Saturday morning, 210 guardsmen in Humvees were deployed with snow shovels, bottles of water and chains to help clear the way and tow vehicles to safety. They also provided fuel so drivers could keep heating their cars.

The turnpike was reopened on Jan. 24.

During snowzilla, the Maryland National Guard performed 70 missions in the first 12 hours of snowfall. In total, guardsmen completed a whopping 100 missions. Guardsmen mostly drove Humvees into inaccessible areas so that first responders could rescue citizens.

“Visibility was really low. It was easy to get disoriented and lose your positioning on the road,” said Sgt Steven Fichthorn.

Sergeant Stephen Fichthorn’s home has been the state police’s barracks in Westminster, along with staff Sergeant Alyssa Tavernia who piloted a hummer for more than a dozen rescues.

“I am really glad that this can go in such deep snow because we pushed this to the limit,” said Tavernia.

The DC National Guard wrote on its Facebook page that it deployed 100 Guardsmen in preparation of the storm.

“The D.C. Guard is providing support at the request of the District government. D.C. Guard Soldiers and Airmen have reported to duty and have been dispatched to locations in the District to provide support using HUMVEES to transport essential personnel,” it wrote.

That number increased to 172 by the end of the weekend. Driving Humvees to traverse tough terrain, National Guardsmen dug out trapped vehicles. 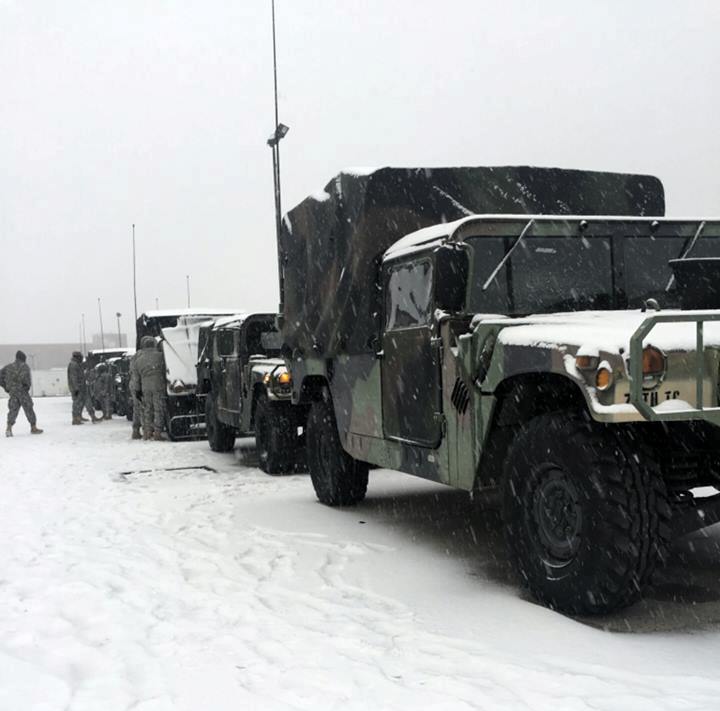 When the governor declared a state of emergency, the National Guard leapt into action. A stunning 490 National Guardsmen responded to weather emergencies during the winter storm in Virginia last weekend. Many Guardsmen transported blood for the Red Cross and personally rescued stranded residents.

“As far as I’m concerned everybody in Virginia is my neighbor and I’m out here helping my neighbors to the best of my ability and my fellow soldiers are doing the same thing,” said Sergeant Rick Hyde of the Virginia National Guard.