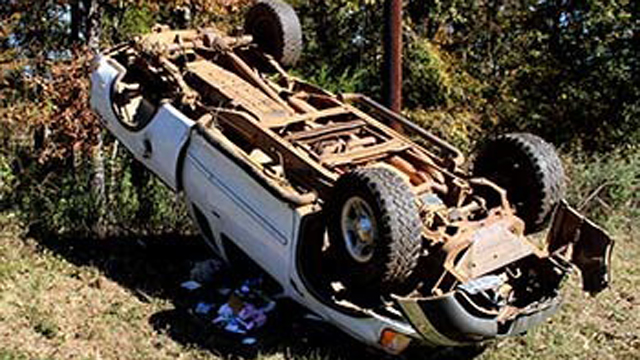 Three Marines returning from a funeral detail in Texas were first on the scene after Patti Cranford lost control of her truck, swerved off the road, and became trapped inside her overturned truck. The Marines swiftly jumped into action, cutting the woman free of her seatbelt and safely removing her from the wrecked vehicle.

The Marines who rescued Cranford were Staff Sgt. Micheal G. McGee and Lance Corporals Calvin J. Combs and Brandon L. Persilver, all three with Bravo Company, 1st Battalion, 23rd Marine Regiment, 4th Marine Division based in Louisiana. They were in Shelbyville, Texas as part of a funeral detail and on their way back to Louisiana.

McGee, Combs and Persilver happened upon Cranford’s overturned truck and pulled over to find Cranford responsive but trapped inside. She told the Marines that at time of her accident she was on her way to the same funeral they just attended. In his dress blue uniform, McGee, who has completed the Marine Corps Combat Lifesavers Course, took point and led his fellow Marines as they carefully removed Cranford from the truck and out of harm’s way. While freeing Cranford from the truck, an off-duty EMT also saw the wreck and stopped to help the Marines. Once McGee initially assessed Cranford’s condition, he allowed the EMT to render first aid. The Marines stayed until local police arrived, and then they continued on their drive back to Louisiana.

To be sure Cranford was safe, however, McGee later called the funeral home and left his phone number with them in the hopes that a family member would contact him with Cranford’s condition. The deceased’s daughter-in-law promptly called McGee to let him know Cranford, her cousin, was doing well thanks to the three Marines.

On December 8th, the Marine Corps reported McGee’s response to the events leading up to and after Cranford’s rescue. While Cranford credits the three Marines with saving her life, McGee’s take was more humble.

It was quiet for 15 minutes. Then I told the Marines, ‘Hey gentlemen, you guys did really good back there. But I just want to make it very clear none of us are heroes. You just did what you were supposed to do,’ and they all agreed. We just did what anybody would have done. – Staff Sgt. McGee