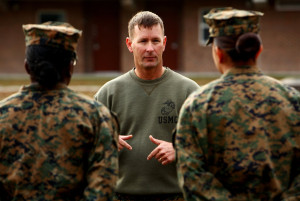 At Camp Lejeune, North Carolina, 100 women and 300 men are part of a test group to determine training standards for future female Marines. This group of men and women from around the country will also be studied to determine the future eligibility of female Marines in particular Marine Corps ground combat positions.

Captain Ray Kaster is the infantry company commander for the experiment. The experimental testing is ongoing and the group will move to the Mojave Desert and the Sierra Nevada for live-fire combat training next year. Endurance and marksmanship are some of the several qualities that Marine researchers will use in their long-term analysis.

Testing structure will include control group vs. experimental group testing methods. Marksmanship testing, for example, will compare the results of an all-male group against a group with one woman and another group with two women.

Of the current Marine Corps troops, only 7% are women. However, a 2013 Pentagon directive announced the future inclusion of female Marines in ground combat positions. The Pentagon has expressed its wish that females occupy these roles by 2016.

The Marine Corps will use this extensive research group to help support its recommendation next fall on whether or not female Marines should be allowed to serve in ground combat positions.