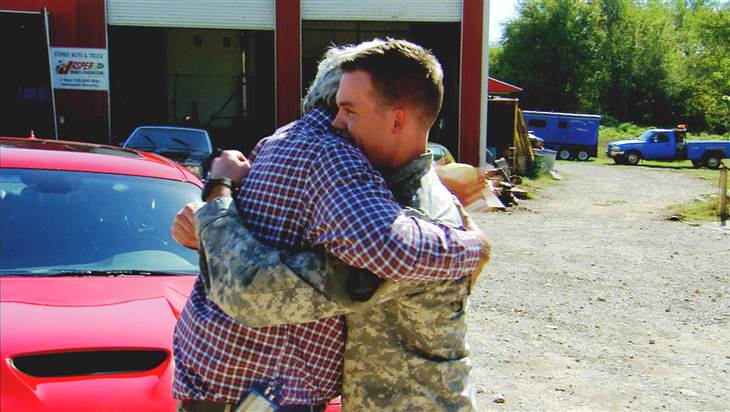 What an incredible surprise!

Jay Leno recently surprised a wounded soldier with a brand new car as a part of NBC’s “Shine a Light” series.

After taking a trip to Afghanistan with NBC News anchor Al Roker for USO, a non-profit organization that works to lift the spirits of service members and their families with performances and celebrity appearances – Leno noticed that many of the soldiers are barely in their 20s and although they are generations apart, some of them have shared interests.

Especially Cpl. Ethan Laberge who expressed his love for cars, something Leno happens to be a collector of.

So they had the soldiers enter a drawing.

“We took all these wounded warriors and did sort of a lottery and reached in and picked a soldier at random (to) do something for him and hopefully it expresses what we want to do for all the soldiers,” said Leno.

Cpl. Laberge was on foot patrol in Afghanistan when a suicide bomber detonated himself – leaving him seriously injured and two of his fellow soldiers dead.

Leno wanted to learn more about Laberge so they went for a joyride in the new 2015 Dodge SRT Hellcat and talked about military life and tragic incident that changed his life over some BBQ.

When they got back to the base, Leno asked how he liked the car after responding “That was awesome … I wouldn’t mind having one of these,” Leno responds “It’s yours, America loves you. Thank you buddy. Have a lot of fun. Don’t get any tickets.”

This is one surprise I’m sure Laberge will never forget!

Watch the video below