A photo of an injured military dog named Rocky recovering in a hospital has gone viral thanks to the Purple Heart looped around his collar.

Rocky and his partner, Specialist Andrew Brown of the U.S. Army Military Police, were deployed to Afghanistan this October. A couple months later, an improvised explosive device injured both of them during a routine search. The duo was initially flown to Germany to treat the wounds ripped open by flying shrapnel. While sharing a hospital bed, Brown snapped a picture of Rocky with a Purple Heart. 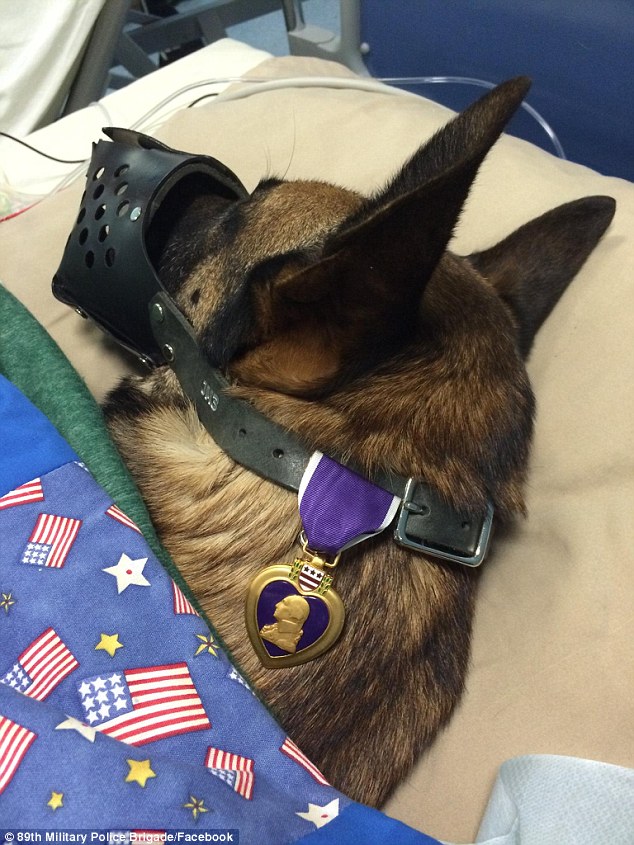 The medal itself is most likely an honorary Purple Heart because dogs are not technically eligible for the award. Only Chips, a dog who served in World War II, has been awarded the distinction and permitted to keep it even after the military decided to bar dogs from eligibility. ABC News reported that Brown won a true Purple Heart for being injured in the line of duty.

Brown has since been flown to Walter Reed Hospital to recover from his injuries. Rocky remains in Germany to undergo more surgeries before he is sent back to the United States to reunite with his partner.

Military dogs are considered American soldiers. Brown told ABC that Rocky is actually a rank above him.

“He does everything,” Brown said. “I’m just really a guy with a leash. I bring him to the area and let him do his thing. If he responds, I translate that … let them know my dog got a response right here.”

The 89th Military Police Brigade provided an update on Brown and Rocky’s conditions on Facebook.

SPC Brown and Rocky are both doing well after being treated for injuries they suffered from an IED blast earlier this week while searching a structure in support of ongoing operations in Afghanistan. They are both very thankful for your thoughts and prayers and are in the process of heading back home. SPC Brown arrived early this morning to Walter Reed where he was met by his waiting family, and Rocky is expected to return to Fort Hood in the coming weeks. Please remember them, as well as all our Soldiers deployed around the world, during the holiday season. Proven in Battle!