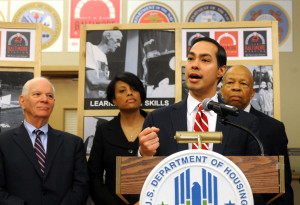 Last week, Secretary of the Department of Housing and Urban Development (HUD) Julian Castro revealed HUD’s $500,000 grant in housing vouchers for 60 homeless veterans in Maryland. It is part of a new round of funding, totaling $13.5 million nationwide, towards rental assistance vouchers for homeless veterans.

This new influx of vouchers comes months after a similar announcement in Maryland when HUD allocated 55 vouchers to Baltimore City, helping to house 290 formerly homeless veterans.

HUD, however, does not act alone to end the national crisis of veteran homelessness. In 2009, President Obama announced a government-wide push to end veteran homelessness by December 2015. Since then, HUD and the Department of Veterans Affairs have worked together to accomplish this goal. HUD and the VA provide vouchers to local housing authorities and VA medical centers who accomplish the field work necessary to house local homeless veterans.

This joint effort is primarily managed by the HUD-Veterans Affairs Supportive Housing Program (HUD-VASH), which releases a financial report for each round of voucher funding, categorized by the number of vouchers and total dollar amount given to any local VA or housing authorities.

HUD-VASH information and assistance for homeless veterans is available by contacting the National Homeless Veteran Call Center at 877-424-3838, open 24 hours a day, 7 days a week.