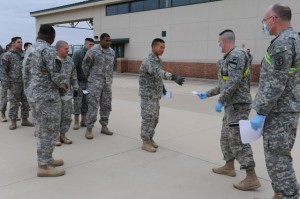 Army officials announced on November 24 that the Controlled Monitoring Area Site (CMAS) located at Fort Hood, in central Texas, is operational and ready for incoming troops. Fort Hood is one of five U.S. locations with containment and monitoring centers for Army soldiers returning from African areas with known cases of Ebola.

Army representatives stressed that this is not a detainment, but a way to effectively and safely monitor soldiers in case of infection.

Established per Department of Defense directions, each CMAS facility will house and monitor troops for 21 days after their return to the United States from Ebola-stricken areas. Meant to establish an “abundance of caution,” the Fort Hood CMAS installation will divide soldiers into “cohorts” that will be self-contained within the complex and separated from administrative areas.

Also included in the potential CMAS population are soldiers who have been exposed to Ebola-infected individuals within the United States.

The Fort Hood CMAS has advanced waste disposal protocols and segmented population directives to ensure the maximum level of containment should any troop be infected with Ebola. If an individual begins to exhibit signs of the illness, they will be quarantined in the CMAS’s medical facility and transported to a nearby Army hospital.

The Fort Hood CMAS can monitor up to 100 troops at a time. In addition to beds and a cafeteria, the facility is equipped with gaming systems, wi-fi,  a library, exercise equipment, and televisions.