Eddie Ray Routh, the embattled Ex-Marine accused of the fatal shootings of both “American Sniper” author Chris Kyle and friend Chad Littlefield, was found guilty by a Texas jury late Tuesday and immediately sentenced to life without the possibility for parole by presiding State District Judge Jason Cashon.

Routh, 27, who has been repeatedly hospitalized and treated for mental illness after his honorable discharge in 2010, did not appear to react as the judge read the verdict.

Throughout the trial, the defendant’s noted struggle with post-traumatic stress disorder raised plenty of questions and controversy. Many speculate that it was the basis for why the prosecution did not pursue the death penalty.

The trial was held in a courtroom just three miles away from a movie theatre were “American Sniper” was playing, in rural Erath County, about 100 miles southwest of Dallas.

After the verdict was read and it was all over, a few of the family members issued impact statements in the courts.

“You took the lives of two heroes, men that tried to be a friend to you, and you became an American disgrace,” Chad Littlefield’s brother, Jerry Richardson told Routh. “Your claims of PTSD have been an insult to every veteran who served with honor, disgracing a proud military with your cowardice.”

“The state of Texas has decided to spare your life, which is more than you were willing to give Chad,” Don Littlefield said.

Chris Kyle’s widow – Taya – who had just a few days prior traveled to the Oscars and carried her husband’s dog tags on the red carpet (the movie “American Sniper” based on her husband’s book/life was up for an award) muttered in frustration during the defense’s closing remarks and left the court. She did not return for the verdict, sentencing or impact statements. 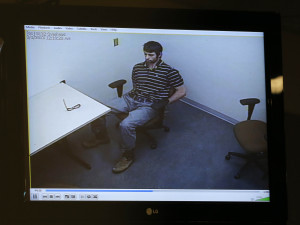 The defense had argued that Routh was delusional when he shot Kyle and Littlefield, and that he believed there were hybrid “pig people” trying to kill him. The prosecution, however, were steadfast throughout the trial in painting a picture that the defendant was only pretending to be insane the day of the shootings – after being caught by police trying to flee in the truck he stole from Kyle. They argued that he was troubled, but ultimately responsible.

Before the jury handed in their verdict they were exposed to a good deal of damning evidence against Routh, including a recording of an interview he had with a New Yorker magazine reporter from jail where he admitted to the killings saying he was “riled up” and had to “take care of business”.