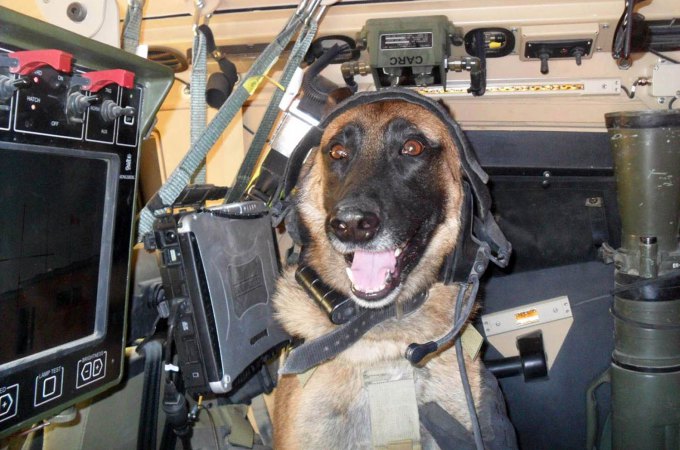 The New York Veterans Day Parade today will honor veterans from all branches of the military and will feature special guests. Among these guests are six K9s who honorably served overseas as bomb sniffers, early-warning givers, military police dogs, and steadfast companions.

These literal dogs of war will be featured on their own float accompanied by several of their former active duty handlers and “Law and Order” star Ice-T, an Arm veteran. This will be the first time military dogs will have their own float in the Parade. Their appearance and float is sponsored by the American Humane Association (AHA) and philanthropist Lois Pope.

“She was my best friend. I talked to her more that year than I did to regular people.” – retired Army Staff Sargent Jason Bos about his “battle buddy” Cilahas, who he adopted after her retirement.

The featured dogs’ service is certainly nothing to sniff at. One participated in over 100 missions clearing insurgent homes and another helped to save the lives of two soldiers when their vehicle ran over a bomb. Detection dog Ryky not only helped injured soldiers escape an enemy ambush, but she also earned the K9 Medal for Exceptional Service.

An extra special touch? All six of these four-legged veterans has been reunited with his or her combat partner, each expressing gratitude for their furry companion’s service and being able to reunite with them in the States. Several organization, including the AHA, are pushing to make the adoption of retired military dogs by their former active duty handlers a standard practice.

“This showcases that age-old human-dog bond at its best.” – Ryan Hegg, deputy director of the United War Veterans Council.

Another float, sponsored by the A&E Network, will feature service dogs who work with soldiers with PTSD. It is also the first of its kind. The Parade begins at 11:30 a.m. (ET) in Madison Square Park. It will air locally beginning at noon (ET) on Fox5.