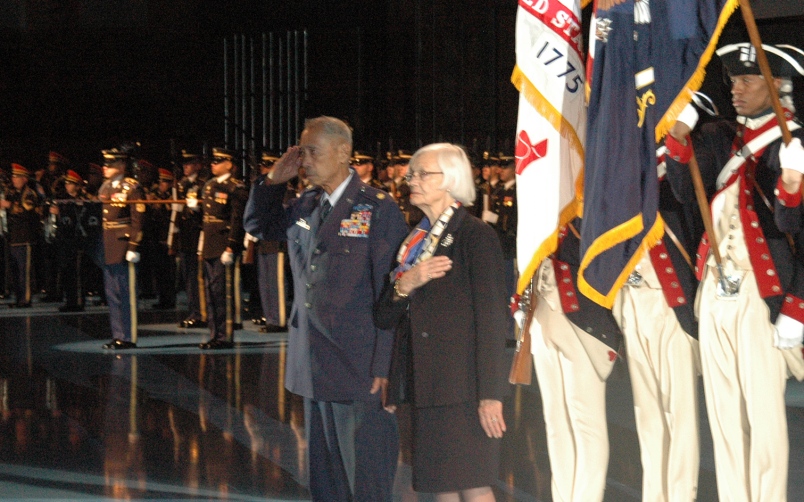 (94-year-old Jesse Baltazar and his wife on stage during the award ceremony. photo: Stars and Stripes, Stripes.com)

It took 73 years, but the Army finally awarded Jesse Baltazar the Purple Heart he earned in 1942. Many of Baltazar’s military records were lost after WWII, which prevented him from receiving the Purple Heart despite his enduring courage and inspirational life.

After the attack on Pearl Harbor in 1941, Baltazar joined the U.S. Armed Forces Far East in the Philippines, the country of his birth. He served with the Army’s 71st battalion and sustained shrapnel wounds during a Japanese bombing before undergoing a makeshift emergency surgery in the jungle.

Soon afterwards, the Japanese Army captured him and other American and Filipino soldiers fighting in the Philippines. The Japanese forced their prisoners of war to suffer through the Bataan Death March, a brutal 60 mile march across the Bataan peninsula.

Still injured and using a bamboo shoot as a walking stick, Baltazar managed to escape by hiding out in a fishing boat after three days on the march. Determined to free his homeland from Japanese control, he joined the Filipino resistance and became a guerrilla fighter. In 1944, American military reinforcement drove the Japanese military from the Philippines.

After the war, Baltazar left the Army, moved to the United States from the Philippines, and became the first native Filipino to receive an Air Force commission.  After fighting in the Korean War, he retired from military service as a major and worked for the State Department from 1966 until 1988.

Inspired by his life of service, the Baltazar family campaigned for years to get his Purple Heart before story eventually reached Secretary of State John Kerry.

On January 20, 2015 at Joint Base Myer-Henderson Hall, Army chief of staff General Ray Odinero awarded Baltazar the Purple Heart. While Baltazar received other military awards and honors over the years, this particular award was a long overdue recognition of one of his earliest sacrifices as a service member.