Army Veteran and Mother of Three Given a New Home 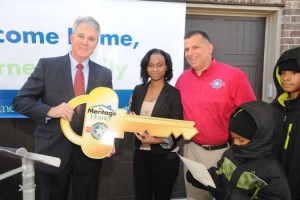 Operation Homefront and Houston-area homebuilder Meritage Homes Corp. recently donated a new, mortgage-free home to an Army veteran and her three children. U.S. Army Specialist Brandi Barnes, previously living in a Houston apartment with her children, received a new home for her family, in the Houston suburb of Cypress, after her application was selected by Operation Homefront.

Barnes deployed to Qatar in 2010. After deployment, she served state-side as a human resources specialist for the Army. She retired in 2013, and has since lived in a Houston apartment with her two sons, ages 12 and 9, and three year-old daughter.

Barnes quickly applied after learning about Operation Homefront’s ‘Homes on the Homefront’ mortgage-free home program, which matches qualifying veterans with a mortgage-free home donated by homebuilders like Meritage. Her case went through a screening, qualifying, and approval process. Operation Homefront selects applicants based on a variety of factors including financial need, family, and injuries. Each home has its own dedicated case worker. This September, Barnes assumed a recent call from a case worker was about paperwork. Instead, the case worker hinted, “‘I might need you to come and get the keys to your new home.”

Barnes and her family moved into their new 1,882 square foot Houston-area home in November, and she looks forward to the stability this new step will provide for their lives.

Barnes is one of several Operation Homefront mortgage-free home recipients. The non-profit charity operates several veteran-centric initiatives including the Military Child of the Year awards and an annual holiday toy drive. To learn more about Homes on the Homefront, visit them online.