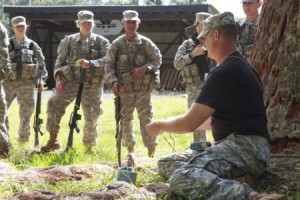 The Army recently held a pre-screening course in Hawaii for female soldiers interested in the Ranger Training Assessment Course (RTAC) at Fort Benning, GA. The female soldiers who participated in this challenging course, all volunteers, experienced the same testing as students would during an actual RTAC.

Held at the 25th Infantry Division’s Lightning Academy/Jungle Operations Training Center, at the East Range Training Center in Hawaii, this event is part of the Army’s search for female soldiers to attend future RTACs in Georgia.

The screening lasted twelve days, ten of which included the rigorous assessment course. The soldiers each began with a physical fitness test including 49 pushups in two minutes, 59 sit-ups in two minutes, and a five-mile run in 40 minutes. The run was immediately followed by six pull-ups. The course itself included instructions on the correct placement of Claymore mines and a Combat Water Survival Assessment with a 49-foot swim in full combat gear.

I feel that [the women attending pre-Ranger screening] are Soldiers and if they feel that they perform as well as their counterparts to their left and right then by all means go for it. Don’t let anyone ever hold you back. – attendee 1st Lt. Sara Roger, fire support officer, 2nd Battalion, 11th Field Artillery, 2nd Stryker Brigade Combat Team, 25th Infantry Division.

The twelve-day assessment was a selection process as well as a recruitment tool, gathering interest from female soldiers looking to become U.S. Army Rangers while introducing them to the expectations of the RTAC. The initiative mirrors several others in the Marines and the Air Force, all focused on integrating female service members into combat roles.

Officials running the screening course in Hawaii expressed that the standards for future Ranger training courses will be the same for female soldiers as they are for male soldiers.