Army Buddies Were Neighbors for 18 Years, Didn’t Know It 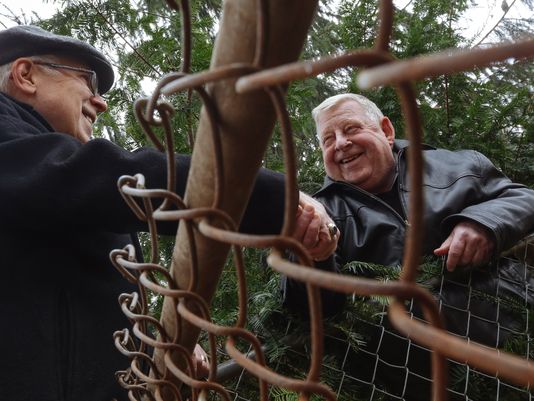 Two men who served in Vietnam together 40 years ago have reunited after discovering they have been neighbors for the past 18 years.

Roger Watson and David Brown were drafted on the same day in 1966. The two met in basic training at Fort Hood in Texas and quickly became friends. Both were also assigned to the 9th infantry, but after returning home from Vietnam, they never saw each other again.

Brown heard that Watson was wounded in combat, but never learned if he had survived.

But thanks to his wife Peggy, Brown would soon be hit with a huge surprise.

According to the Detroit Free Press, Peggy was taking a walk one day when she noticed the Purple Heart license plate on Watson’s car and the 9th Infantry Vietnam Veterans hat in his car and mentioned it to her husband.

Peggy and Watson shared an interest of birds and would meet on opposite sides of their shared fence to feed birds each day.  After initiating an email exchange regarding a picture of a Hawk, Peggy decided to mention the military paraphernalia she’d seen.

“On a different subject my husband Dave was in the ninth infantry 15th combat engineers’ 1967-1968 Vietnam. Wondering if you were there at that time. … I saw that you were in the ninth,” she wrote Watson.

After more exchanged emails, including photos from the men’s time in service – Peggy and Watson discovered the two not only knew each other but were once good friends.

“I was almost shaken,” Watson said. “We’ve been neighbors for 18 years and didn’t realize, here we were.”

“This is incredible,” Brown said. “It’s amazing. So much time has elapsed.”

The two have already met to share war stories and fill each other in on the last 40 years. They have also agreed to see each other more often including meeting at the fence.

Watch the video above.