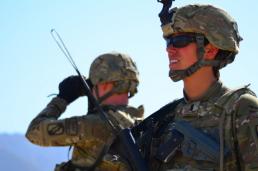 “I’ve always dreamed of going to this unit,” Capt. Robertson told DVIDs. “They get to do all things that I consider fun as an engineering officer… but it was always closed to females”.

In 1994, the Pentagon enforced a policy restricting women from serving in combat on the ground. The policy also banned women from artillery, armor, infantry, combat engineer and special operations roles. Last year, Defense Secretary Leon Panetta at the advice of the Joint Chief of Staff, lifted the military’s ban on women serving in combat. Currently, women make up 14% of the 1.4 active members of the military with only 2.4% making up the front line units.

Women have served in the military since World War I, primarily as nurses and other non-combat roles.

The services have until 2016 to implement the new policy, but the Minnesota National Guard got an early start.

The Minnesota National Guard dates back to 1850 and was formed in St. Paul as the first of nine militia companies. Capt. Tara Robertson now joins the legacy of the 34th Infantry Division Red Bulls, known for its participation in WWII as well as its heavy presence in Europe including the liberation of Rome in 1944.

In 2011, Robertson was deployed to Afghanistan where she was the only female soldier and was awarded a Bronze Star Medal for her service. But one thing she makes clear is that although she has a new role and responsibilities, she’s no different from her fellow male comrades.