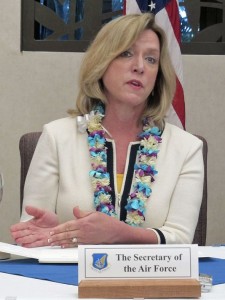 As each military branch assesses readiness and eligibility for women in combat roles, including running a 400-person experimental training group,  the Air Force announced its plans to open seven combat roles to women by early 2016.

Former Secretary of Defense Leon Panetta directed in 2013 that each branch open every combat position to women by 2016, or explain why any must remain closed. As the Pentagon awaits current SecDef Chuck Hagel’s replacement, all services are continuing to move towards opening combat roles to women by or before early 2016.

“Of all the military services, we have the highest proportion of women as compared to the others,” the Secretary said. “

The Air Force’s announcement comes on the heels of several related changes in recent months. The Marine Corps now allows women to take the Infantry Officer Course, and the Army is considering admitting female candidates into Ranger School in the near future.