The 9 Most Decorated Dogs in American Military History

Since the dawn of civilized humans, dogs have been right by our side. Through good times, bad times and yes, even through war times. The Ancient Egyptians, Romans and Greeks all took their faithful mutts into battle, some choosing to adorn them with spiked metal collars and mail armor.

Attila the Hun, Napoleon Bonaparte, Frederick the Great, Xerxes I of Persia all relied on them.

In 55 BC, Celtic Warriors met an invasive Caesar on the shores of Britain with English mastiffs. The pooches must’ve left an indelible impression on the Roman despot – his written account of this encounter makes them one of the oldest breeds of domestic dogs we’ve ever.

The United States is certainly no stranger to this ancient tradition, and throughout its time has seen its fair share of uncommonly courageous canines.

Here – listed – are those few, those proud, those slobbering four-legged service dogs that made their mark in the annals of United States’ military history. 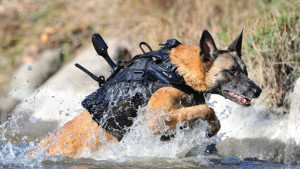 A member of the SEAL team that performed the raid on Osama bin Laden’s compound in Abbottabad, Pakistan in 2011, the highly-trained, highly-skilled Belgian Malinois went through the dog-equivalent of SEAL training. On that fateful night, he was given the duty of securing the perimeter of the compound, using his strong sense of smell (it’s more than 40 times greater than humans) to detect any explosives, and even attacking combatants if it came down to it. He was also equipped with a Kevlar vest with harnesses for rappelling and parachuting and even a night-vision camera with a 180-degree field of vision. NY Post  NAVYSEALS.com 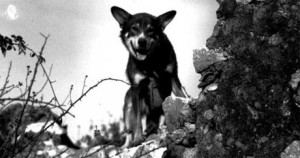 A Collie-German Shepherd-Siberian Husky mix, Chips bolstered the cause in World War II by helping take 10 enemy Italian soldiers captive – a feat that would later earn him medals and the distinction of being the most decorated dog of the war. He saw action in France, Germany, North Africa and Sicily before returning home to Pleasantville, New York in 1945. Dog Time 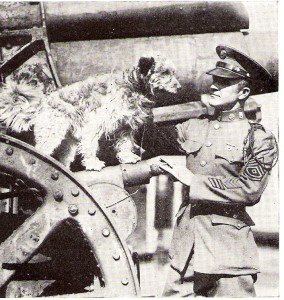 Despite being bombed, gassed and partially blinded during the Meuse-Argonne campaign of World War I, Rags successfully delivered a vital message between the rear headquarters the front lines that provided early warning of incoming shells. Also well-known for saluting every time he saw a soldier on parade (a trick his first owner taught him), Rags would go on to become the official mascot of the U.S. 1st Infantry Division. Wikipedia Photo credit: U.S. Army Signal Corps

A mascot of the 11th Infantry Division during the Civil War, Sallie Ann was a bull terrier with a “brindle coat” who twice marched for President Abraham Lincoln. A warrior at heart, she would accompany the regiment on the front lines during battle and bark at the enemy. She was involved in some of the most crucial (and famous) battles of the war, including Second Bull Run, Antietam, Chancellorsville and even Gettysburg. She would later become immortalized at the site of the Pennsylvania, with a life-size statue erected of her likeness below a bronze sculpture of one of the soldiers she guarded. Wikipedia 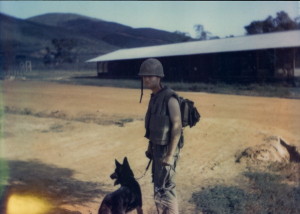 A German Shepherd who accompanied Marine Lance Cpl. Alfredo Salazar in Vietnam, Kaiser experienced his fair share of action. He participated in more than 30 combat patrols and 12 major operations. Tragically, he was attacked during an ambush in 1966 and died trying to lick Salazar’s hand. Dog Time Photo credit: Vietnam War Era Tumblr 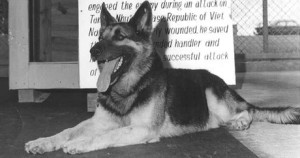 Another German Shepherd who saw action in Vietnam, Nemo was partnered with Airman 2nd Class Bob Thornton to patrol a cemetery near the company’s airbase. During an attack by two Viet Cong guerrillas, Nemo assaulted the enemies which bought Thornton just enough time to call in reinforcements. Shortly thereafter, the Airman was knocked unconscious, which led Nemo to stand on top of him and guard him from any further injury. It worked. Both dog and Thornton recovered fully from their wounds. Dog Time 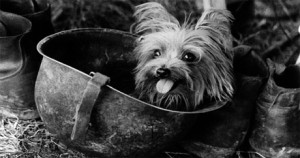 Found in a foxhole in the jungles of New Guinea during World War II, Smoky was a Yorkshire Terrier who was a part of a dozen combat missions and more than 150 air raids. With her sharp sense of hearing she was able to warn soldiers of incoming artillery shells long before they reached them. Dog Time

Serving at Montfaucon, Nantillois, Troyon and LaGrande Montagne during World War I after being smuggled into France, the stray female mixed breed was so good at keeping guard that she had a bounty of 50 duetschemarks on her head, placed by the Germans. Wikipedia 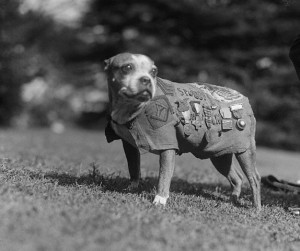 The Audie Murphy of war dogs, “Sergeant Stubby” (as he was also known) was the most decorated canine of World War I. To this day, he is the only dog to be given a rank and promoted to sergeant through combat. He saved his regiment from surprise mustard gas attacks, comforted the wounded and even held a German soldier captive long enough for soldiers to eventually take him in. Oh, and if you’ve ever wondered what a “Hoya” is well – it’s him. He was the inspiration for the canine mascot for Georgetown University. Wikipedia