132 Years Ago Today, the Statue of Liberty Arrived in New York City 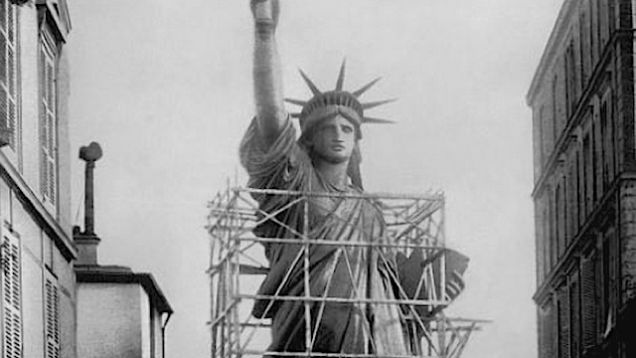 The date was June 17, 1885. The now iconic lady was packed away, broken up into 350 giant iron and copper puzzle pieces — resting in 200 separate cases.

As you probably know, it was given as a gift from France to “the people of America”, and when it was fully assembled about a year later in 1886, it was dedicated in a ceremony attended by then U.S. president Grover Cleveland.

You know its a big deal when an anniversary inspires a “Google Doodle”, and that’s exactly what happened, as you can see below.

More on quite possibly the most famous sculpture in the world, from History.com:

Intended to commemorate the American Revolution and a century of friendship between the U.S. and France, the statue was designed by French sculptor Frederic-Auguste Bartholdi (who modeled it after his own mother), with assistance from engineer Gustave Eiffel, who later developed the iconic tower in Paris bearing his name. The statue was initially scheduled to be finished by 1876, the 100th anniversary of America’s Declaration of Independence; however, fundraising efforts, which included auctions, a lottery and boxing matches, took longer than anticipated, both in Europe and the U.S., where the statue’s pedestal was to be financed and constructed. The statue alone cost the French an estimated $250,000 (more than $5.5 million in today’s money).

Finally completed in Paris in the summer of 1884, the statue, a robed female figure with an uplifted arm holding a torch, reached its new home on Bedloe’s Island in New York Harbor (between New York City and Hudson County, New Jersey) on June 17, 1885. After being reassembled, the 450,000-pound statue was officially dedicated on October 28, 1886, by President Cleveland, who said, “We will not forget that Liberty has here made her home; nor shall her chosen altar be neglected.” Standing more than 305 feet from the foundation of its pedestal to the top of its torch, the statue, dubbed “Liberty Enlightening the World” by Bartholdi, was taller than any structure in New York City at the time. The statue was originally copper-colored, but over the years it underwent a natural color-change process called patination that produced its current greenish-blue hue.