Any good comedian is willing to sacrifice his pride for a good joke. For a famous comedian like Conan O’Brien, he’s ready to put his safety on the line to film a hilarious segment for his show.

Last November, O’Brien traveled to Quatar with First Lady Michelle Obama to visit American troops stationed there and film various segments for his show (albeit with some creative editing and blurring to conceal base locations/military secrets). The footage from that trip is finally seeing the light, and each clip is more hilarious than the last.

In one video, O’Brien visited U.S. base’s Military Working Dog Section to learn firsthand what canine units are capable of. He is introduced to Astor, a German Shepherd who, to O’Brien’s chagrin, doesn’t actually understand German.

At first, O’Brien watched Astor complete various obstacle courses and play fetch. The he decided to attempt the same obstacle course, with disastrous results. Comedians are just not as good at jumping over hurdles and crawling through tubes as dogs are. 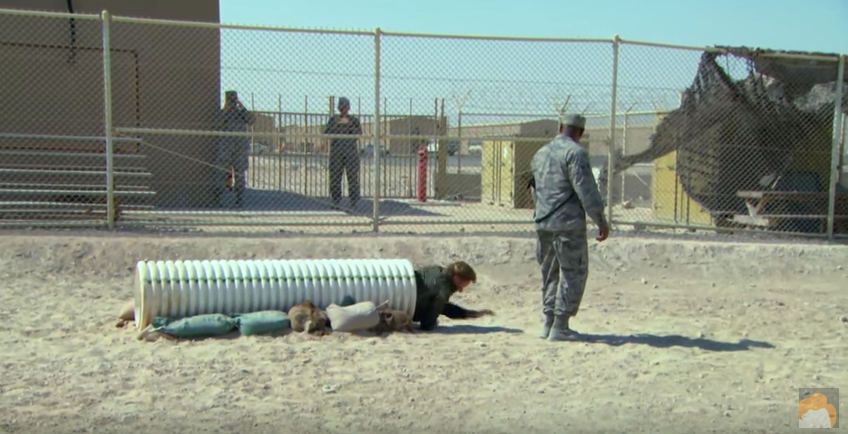 Then Astor left the fun and games behind to show O’Brien his teeth. Once the comedian was dressed in safety gear, Astor chased him down and tackled him to the ground in glorious slow motion.

“I don’t like America,” O’Brien screams in terror as Astor closes in. “I’m Canadian!”

Despite the epic takedown, there were no hard feelings between Astor and Conan O’Brien.

“It’s funny. The dog just kicked the shit out of me and I really love him. He’s a great dog. I really want to get me one of those.”