When U.S. Army veteran Justin Lansford decided to get married, he knew who he wanted standing beside him as his Best Man, er, Dog.

Lansford was gravely wounded while serving in Afghanistan. “I was a paratrooper in the 82nd Airborne Division and we were in eastern Afghanistan in early 2012,” he told ABC News in 2014. “We struck an IED and it flipped my truck completely. I had bilaterally severed femurs which resulted in the amputation of my left leg.”

In 2013, Lansford was paired with Gabe, a two year-old golden retriever trained to help him perform physical tasks and maintain his emotional health. Since receiving his dog through the Warrior Canine Connection, Lansford has grown to love and depend on his furry friend.

When Lansford proposed to his girlfriend Carol on Veterans Day last year, he knew he wanted Gabe to be involved in the ceremony.

“We were figuring out wedding details and one of us just mentioned, ‘We have to figure out what Gabe is going to wear,” Carol said. The couple eventually decided that they wanted man’s best friend to serve as Lansford’s Best Man. 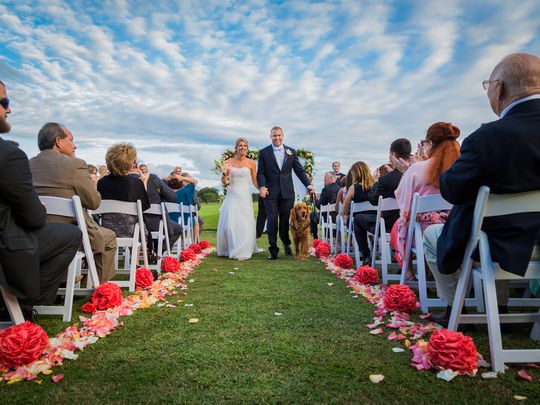 At the wedding last Saturday, Gabe wore his service dog jacket and walked down the aisle with both Lansford and Carol as a family. By all accounts, he was perhaps more well-behaved than human guests.

“[Gabe] was easy, quite frankly, a lot easier than we typically see with groomsmen at most weddings,” the wedding photographer said.