These Walter Reed Dog Stories Will Make Your Year 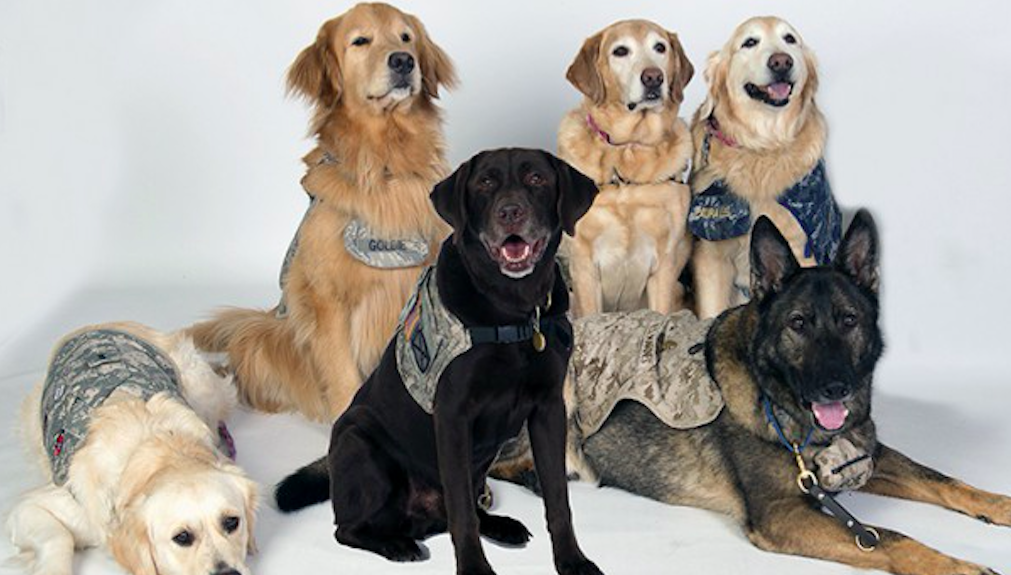 “You can see it in the faces of the people, you can walk around the hospital with the dogs and we’re invisible, it’s about the dogs and the interaction,” says Patty Barry, coordinator for the Walter Reed National Military Medical Center (WRNMMC) Facility Dogs Program. “We can see a person who’s having a bad day walk by, and if it’s just for two seconds in their life, they look at that dog and they smile, you can see it. They smile — even if it’s the only smile they’ve had today. That’s two seconds of their life they got of joy.

“And they can build on that.”

Because it doesn’t take long for someone to come in from the cold and see the difference the canines are making in the hospital, touching the lives of the patients — wounded warriors, vets, children and civilians alike — with every step their lively paws make.

In fact, according to recent facility study, the tight team of facility dogs make over 2,500 contacts cumulatively in a given month, through 250 total hours on the job. It comes out to about 11 contacts per hour, most every one special and memorable.

While they are countless stories to tell about the dogs and their innate healing powers and intuition in guiding ailing military members and vets toward recovery, easing their pain through tender loving care, these are favorites of the staff. Listening to them voice the powerful tales it’s damn near impossible to not be overcome with raw emotion, and well up. Hear them yourself, and you’ll see what we mean.

Take the story of Vice Admiral Laura Lee and how she acted on her magical hunch that a wounded Marine across the room needed her help, and fast:

The very first patient that Laura had seen when she arrived, we took Laura down into physical therapy. There was a young Marine in the back and he was actually getting some therapy. He had had surgery and had to do manipulations and stuff to stretch the muscles, and it was quite painful. He was in the back, and Laura was supposed to go in a trail visiting people, and she heard him. She went passed everybody that was waiting to get their picture taken with her and she sat in front of this young man. She sat there, he held onto her the whole time they were doing his therapy. It was the first interaction she had and she just sat there and he held onto her til he got through his therapy. And in that moment I thought, ‘She gets it better than I do.’ Those dogs cannot be trained to do that. They get it inside. They know what they’re doing.

Or how the dogs team up in the cancer ward like some sort of superhero fighting force:

And then there’s the one about U.S. Marine Archie — an intensively attentive and dutiful German Shepherd — and how he wound up in the New York Times through his work with a critically-injured warrior who, for vital medical reasons, couldn’t even be in the same hospital room as him at first:

Need to dry your eyes? Us too.