While the service dogs that help our wounded warriors and combat veterans all deserve a round of applause, only one gets the title of National Service Dog of the Year. This year that dog was Axel, a German shepherd who helps Purple Heart recipient Marine Captain Jason Haag cope with his post-traumatic stress disorder.

Axel was mere days from euthanization in a high-kill shelter when he was rescued by K9s for Warriors and trained to become a military service dog. As a service dog, Axel helped Haag recover from alcoholism and repair his relationships with his wife and children.

Their inspiring story was noticed by the American Humane Association Hero Dog Awards, which invited the pair to Los Angeles and awarded Axel the prestigious National Service Dog of the Year award. 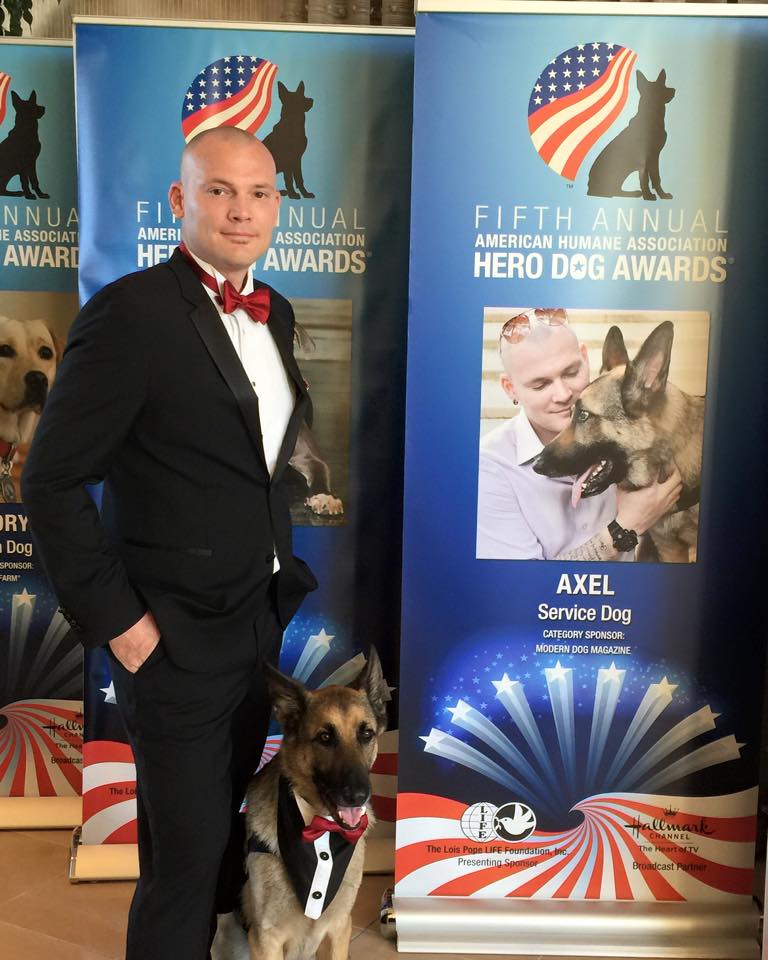 It was on their trip home that Axel and Haag’s victory went sour. They were denied entry onto an American Airlines flight because the airline did not believe Axel was a real service dog.

Here’s what Haag wrote of the incident on Facebook:

Well ladies and gentlemen we have been denied access and not been allowed to board our plane by American Airlines due to us not being able to prove that Axel is a Service Dog. Well I answered all their questioned but didn’t provide “paperwork” because 1) it’s illegal to ask for and against federal law 2) I don’t carry it because I’ve never had issue 3) I called ahead and everything was fine 4) but I did provide an ID to try and appease them. But to no avail. Wouldn’t allow us on the plane. Mind I made it through security and had been waiting in front of the gate for 2 hours in clear view of them. They pulled me out of line as I tried to board. They had my wife in tears in front of 200 people as they brought more managers over to try and bully us. I’m not gonna stand for this. Time to unleash the dogs K9s For Warriors American Humane Association Hero Dog Awards

As Haag points out, it is illegal to ask what service a service dog performs or demand identifying papers, even if the owner is suffering from ‘invisible wounds’ like PTSD. All service dogs wear special harnesses to identify themselves, and legally that is all an airline needs to give the dog entry.

Haag told the media that a rejection like this could be seriously harming to another veteran. “If I wasn’t as far along in my recovery from PTSD, this would have set me back years. It would have put me back in my basement where I was three years ago.”

American Airlines promptly apologized for its treatment of this veteran and his dog.

We apologize to both Captain Haag and his family for the confusion with the travel plans, yesterday. Thank you, Captain Haag, for your service to your country. We are extremely proud to fly you, Axel and your family.