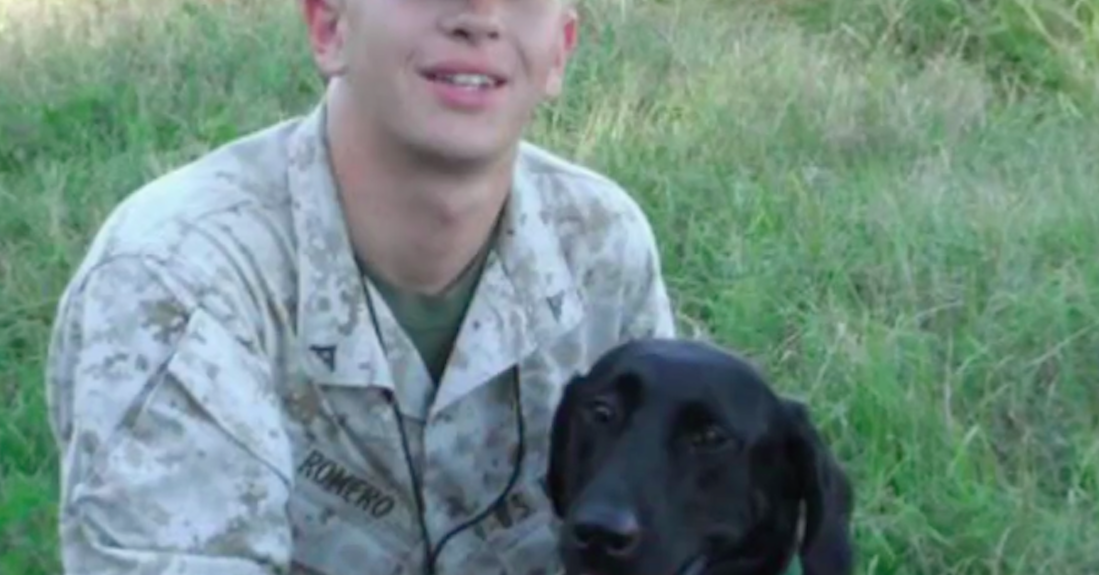 “He was my battle buddy. He was my best friend out there.”

United States Marine veteran Mitch Romero never forgot the guy he leaned on the most while fighting a war overseas.

The fact that “that guy” had a wagging tail, fur and a collar with his name on it are details that became meaningless a long time ago.

Like all the way back to 2010, when the bomb-sniffing labrador retriever and the fresh leatherneck met. Love at first sight, maybe.

Certainly love through immense trials afterward — matters of life of death — when the two were deployed to Afghanistan in 2011 and asked to perform vital tasks under heavy pressure and ungodly heat.

“We did 110 patrols, and during that time Rodeo served on about 45 of those,” Romero remembered, to ABC 10.

The heat was actually the cause for the two’s rift. The Marine sent Rodeo back home to the U.S. on account of the 140-degree heat they were experiencing. That was the last time he’d seen him.

That is, until a few days ago — the fruits of a browbeating search that began a few months after the lab had returned stateside (when Romero got back).

“It was headache,” he recalled.

It took until 2014 for the service member to even track down Rodeo’s tag number, which didn’t produce a damn thing until early 2016. That was when he discovered Canine Working Heroes, a nonprofit for former military dogs. Through a post, the quest finally hit pay dirt: Romero’s former partner was alive and working, actually, in New York City.

At its infamous prison, on Rikers Island.

Last week, the organization made the long-awaited reunion happen, and flew both the veteran and his wife to the Big Apple where he and Rodeo embraced for the first time in years.

“Rodeo just came running up, and I gave him a big hug and knelt down, and was sitting there petting him — it was amazing.”

“My heart was pounding. It was emotional for me. He means a lot to me, even though I had never met him before. He’s part of our family,” said his wife, Sara Beth.

Romero said Rodeo will likely retire from working at the jail in about a year. When asked whether he would want to adopt Rodeo after his retirement, Romero said the search wasn’t necessarily about that.

“There’s always hope, but he has such a great home out there. I would really hate to take him away from that,” Romero said.

But now that he’s been reunited with his long-lost “battle buddy,” Romero has no plans to lose touch with Rodeo or his current handler. Romero is talking about returning to New York City when Rodeo retires – and trying to plan for Rodeo to visit Romero and his family in Sacramento.

Here’s video from a couple years ago.

It’s captures a Marine vet from Michigan being reunited with his fellow military member after four years apart — what he called “all my Christmases rolled into one.”: