Community Rallies to Reunite Ailing Veteran with His Dogs

When Navy veteran James Pack suffered a heart attack in September, he was forced to surrender his two dogs, Bailey and Blaze, to a local shelter. But as his recovery stretched from days to weeks to months, the shelter had to put the two dogs up for adoption in case Pack would not be able to reclaim them.

Pack had adopted both dogs when they were only a few weeks old, and before his heart attack he was looking for a new home the entire family. During the transition, he was prepared to live out of his car with his dogs. Ninety days in the hospital put a dampener on those plans. As he suffered more medical complications at the hospital and even briefly lost feeling in his left side, Pack often called the SPCA shelter in Camden to check on his “babies.”

Though the chances of Pack’s two very well-trained and friendly dogs being adopted by a new family were high, they were still at the shelter when their owner was finally released from the hospital.

“This is a miracle,” Pack said. “After 90 days I figured they would be gone.”

There was just one thing in the way of Pack and his pooches–He didn’t have the money to buy them back from the shelter.

Pack visited the shelter on a Wednesday to see his dogs and discuss the $210 adoption fee. After he left, shelter employees decided to pay the fee for him and surprise the veteran the next day.

The reunion was caught on video, which has already been shared more than 60,000 times and viewed 3 million times. You can watch it here. 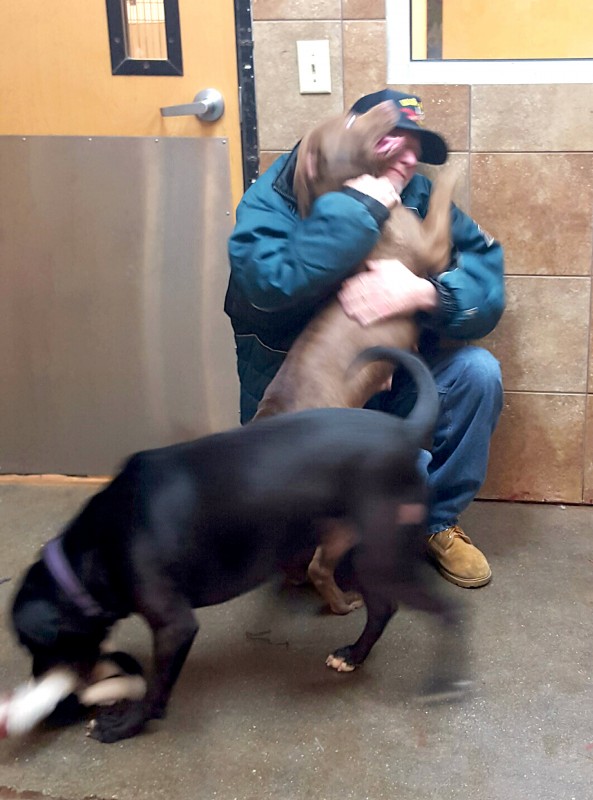 After bringing the dogs to their new home, Pack reported that they were doing great.  “The two babies are doing fine,” Pack said. “I let them stay in bed with me last night, until they pushed me into the floor.”