One British veteran coped with the death of his military dog and fellow war hero by wearing the animal’s ashes as a tattoo.

Treo the black labrador was partnered with Sergeant Dave Heyhoe in 2005. During his service, Treo saved the lives of dozens of military members and earned the Dickin Medal–the animal equivalent of Britain’s prestigious Victoria Cross. In one memorable incident, Treo discovered a ‘daisy chain’ of bombs planted by the Taliban.

When Heyhoe retired from military service after 24 years, he formally adopted Treo and brought him home too.

Treo died at the ripe age of 14 in October 2015. Devastated by the loss, Heyhoe decided to memorialize his furry friend by sprinkling his ashes into tattoo ink and carrying it on his body forever.

The tattoo, located on Heyhoe’s calf, depicts Treo’s paw print and a poem in tribute to his memory. 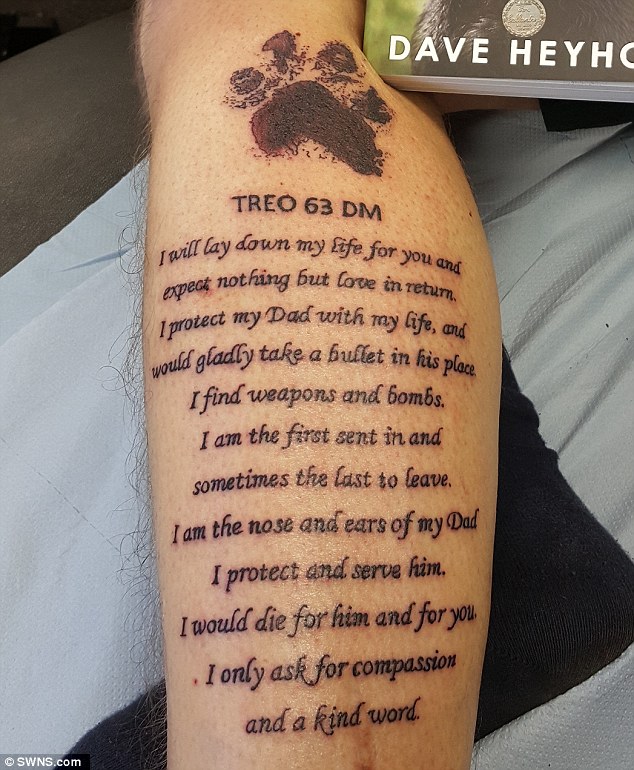 While Heyhoe acknowledges that his choice to incorporate the military dog’s ashes into a tattoo is unusual, it was a natural decision for him to make.

“The tattoo completes me,’ Heyhoe said. “People might think it’s strange, but Treo was like a son to me, and his death his knocked me for six. Over the years we have seen gunfire, death and bomb scares together – I’ve been lost without him. Now it feels like Treo is by my side – where he’s supposed to be.”

“I couldn’t be happier with it,” he added. “I felt a sense of peace after I had it done – I could feel him there by my side where he’d always been. My family and the kids were so close with Treo so it’s nice for them to look at the tattoo, too.”