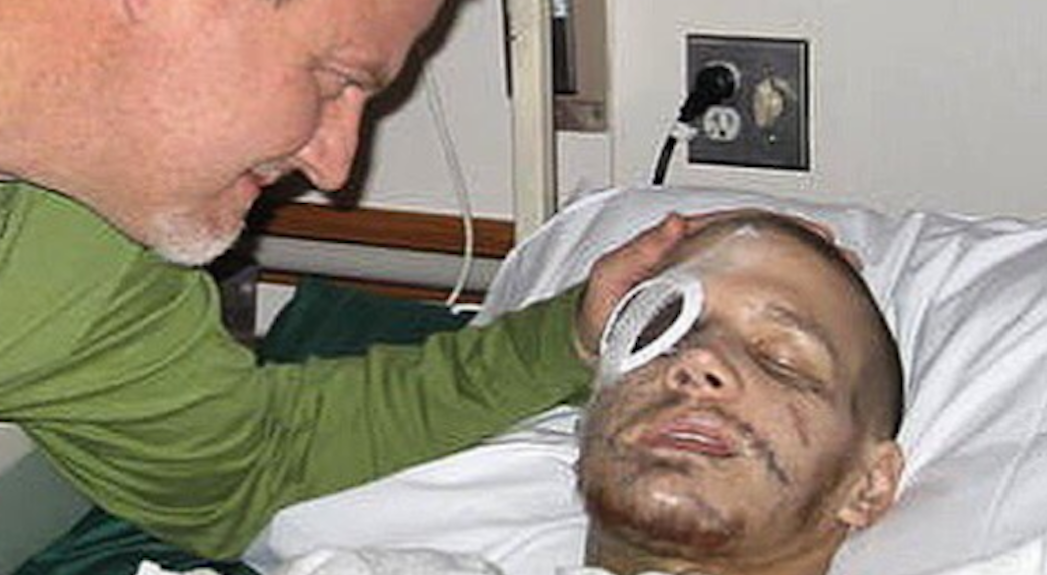 In recent years, former United States Marine Kyle Carpenter, America’s youngest Medal of Honor recipient, has become a household name. Since receiving the military’s most prestigious award for valor, he’s been celebrated as not only as a hero, but as a moving motivational speaker — an inspiration to service members and civilians alike.

This Father’s Day, Carpenter reminded all of us of his immeasurable sacrifice by tweeting a touching photo with his father in the hospital in the days after suffering his horrific injuries.

Happy Father's Day dad. Thank you for always being there. I love you pic.twitter.com/y1bZlPwI2j

Carpenter enlisted in the Marine Corps at age 19 in 2009, and was soon sent off the fight in Afghanistan.

In 2010, he jumped onto an incoming hand grenade while in Marjah, shielding his fellow Marines from the blast. Miraculously, he lived, but sustained life-threatening injuries to his skull, face, and arm.

In the initial effort to control Carpenter’s injuries after the explosion, fellow Marines only able to keep him conscious by reminding him of the stories he had shared about his family.

His wounds were almost immeasurable. They included multiple shattered bones (including his right arm and jaw), two ruptured ear drums, a collapsed lung, and loss of his right eye. He underwent weekly surgeries, with a grand total of over 40 in all.

As soon as they were notified, his parents, Jim and Robin Carpenter, at his bedside while he fought daily to survive.

The future looked bleak for their son in the beginning, but through sheer will and the ability of American military medical professionals, he beat all expectations.

“When I first saw Kyle, I didn’t think he would have any quality of life—living bound to a bed or a wheelchair,” his father, Jim, said. “He kept progressing and I kept getting my son back.”

Currently, Carpenter is studying at the University of South Carolina in Columbia, where he is majoring in International Studies. He continues to regularly tour around the country, sharing his story and inspiring others.