After Saving Lives on the Way to Work, Soldier Receives Medal 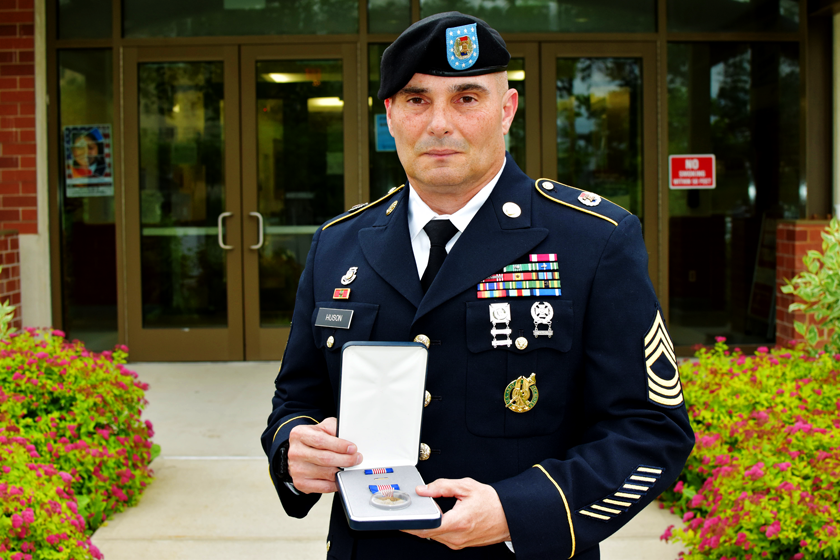 Military instincts extend far beyond the parameters of the battlefield.

Master Sgt. Michael Huson exemplified this late last year when he saved two lives on his way to work.

He was driving along when he noticed a tractor-trailer that was flipped on the side of the road. Realizing the accident must have only just occurred due to the bellowing smoke and spinning wheels, he pulled over to investigate.

Inside the wreckage were two passengers. A bystander who had stopped to help immediately called 911 while Huson assessed the status of both people.

The female in the passenger seat wasn’t badly injured but the driver was slumped over with blood on his face. They both only spoke Spanish but as luck would have it, the other man who was helping did too.

Using him as an interpreter, Huson used teamwork and his 23-years of Army experience to apply first aid to the injured driver until paramedics arrived.

And when they did, Huson stayed while the passengers were taken to safety and then simply continued on his way to work, not even realizing he still had the driver’s blood on his hands.

However, Huson told Army Times that his actions were simply in line with what anyone else would have done.

“I don’t think I did anything extraordinary,” he said. “It was the right thing to do.”