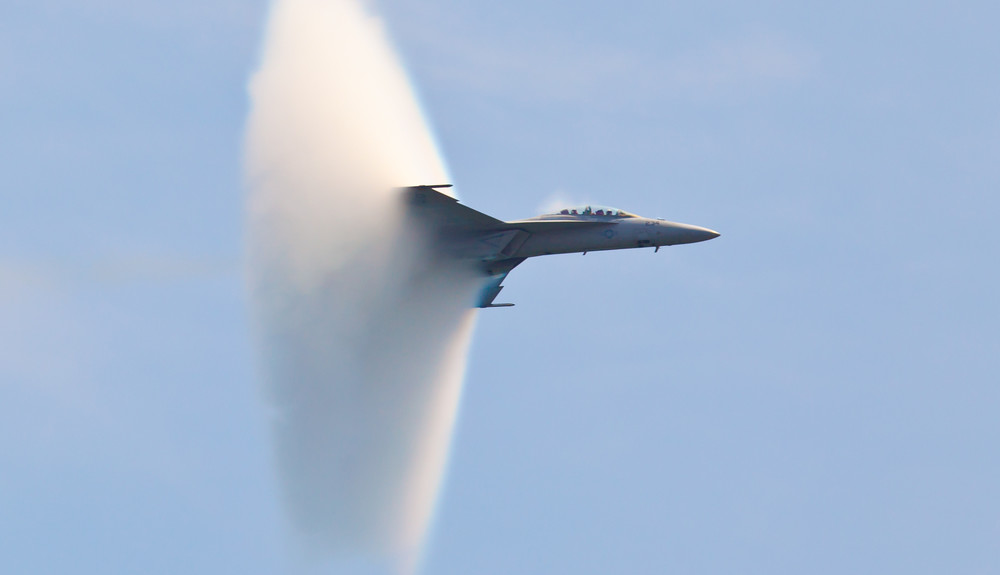 No, we’re not talking about Shawn Kemp (a Sonic) disembodying the rim back in the 1990s (a boom!).

We’re talking about the myth that a sonic boom will — by its lonesome — make glass shatter into pieces.

To find out the answer, we hand you over to the guys (Jamie Hyneman and Adam Savage) from the popular television show “MythBusters” via an old episode (circa 2009) of theirs. In it, Adam goes up with the United States Navy’s Blue Angels to prove or disprove the “myth”.

Honestly though, we’re not sure what’s more entertaining, the final answer to the question, or the tests they put Adam through in order for him to withstand the g-force one experiences traveling in an aircraft moving at the speed of sound.

Will he successfully avoid the gray-out/blackout? Or will he lose his lunch (they do pump him up as the “king of the cookie toss”).

As for the sonic boom? The answer is yes.

However, it came with a caveat.

In the full episode, the boys tried to break glass with flybys at 8,000, 2,000 and 500 feet. None of these produced a shatter. It was only when the jet flew supersonically over the shed at 200 feet that anything broke, and only that single window shown in the two previous links.

This from Aero News Network:

Two Blue Angels F/A-18 Hornets made multiple supersonic passes at altitudes as low as 200 feet directing the sonic boom toward the ground where various type of glass was staged. A sonic boom, which sounds and feels like a large explosion, occurs when an aircraft breaks the sound barrier by traveling at least 750 mph.

The “Mythbusters” teamed up with the Blue Angels and Marines Feb. 18-20, 2009, on the Barry M. Goldwater Range to test whether a sonic boom from a jet would shatter glass. The Blue Angels made multiple passes at different altitudes to test the effects on glass in a car, a house and various glassware.

“I came up with the idea of getting ‘Mythbusters’ to test the theory about a year ago,” said Capt. Tyson Dunkelberger, Blue Angels’ public affairs officer. “They were busy filming at the time, but we tried again six months ago and now we’re finally here working with them.” To test the myth, the crew built a small shed with a window, parked a car nearby with the windows rolled up and set up glassware on a table. Two Blue Angels F/A-18 Hornets then zipped over the test area, directing the sonic boom toward the ground as they passed.

“Mythbusters” co-host, Jamie Hyneman, stayed on the ground at the site, while his partner, Adam Savage, rode in one of the jets. The theory was tested with the Blue Angels flying at elevations of 8,000, 2,000, 500 and 200 feet. Yuma’s Goldwater Range was selected as the test site because it contains an authorized supersonic flight corridor.

“The only places that we could have done this were here or offshore in the Pacific,” said Dunkelberger. “Obviously the range was much more practical.” This was the show’s first experience working with the Marine Corps.

“Working with sailors and Marines has been a great experience,” said Hyneman. “It’s nice to work with people who are so on the ball and dependable.” Events like this are part of the Blue Angels public relations mission.