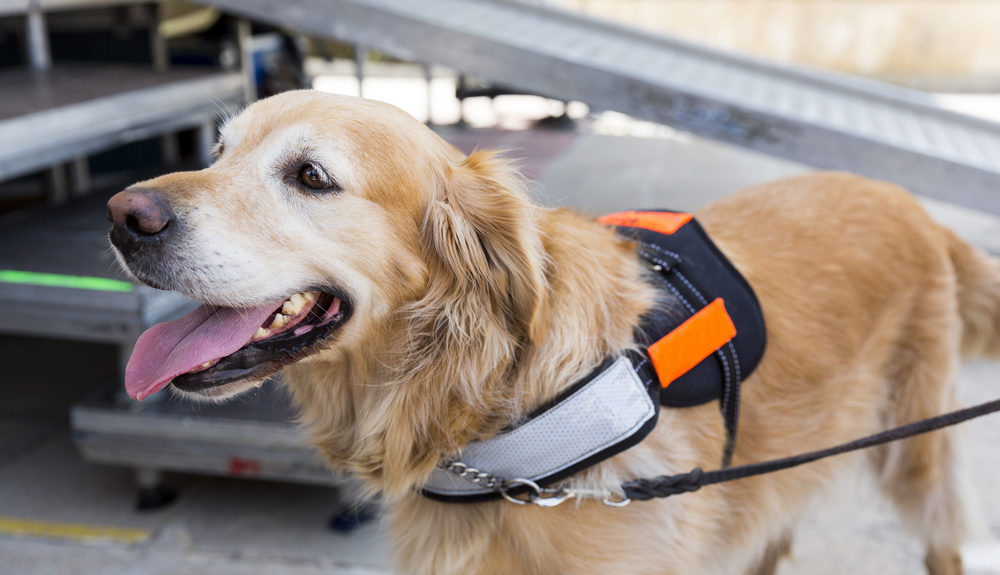 Stacey Thompson is a United States Marine veteran who is one of the many former service members in America dealing with an ugly burden: post traumatic stress disorder (PTSD).

She also has to live through the aftermath of a horrific crime. During her time in the military, she was raped by one of her sergeants.

The anxiety and trauma associated with the incident is something she has to deal with each and every day.

So when a nonprofit — Labs for Liberty — came up to her after a motivational speech she gave last year and offered her a free service dog, she thought what most everyone would think: it was gift from the heavens. Finally, she was going to have a trusted companion, not just drugs, with the ability to ease her pain. Make it simpler to cope.

The dog, Reef, a chocolate lab, was eight months old when he was finally introduced to her at a momentous (and televised) public greeting at a local Utah airport near her home.

Much to her surprise, however, it was the beginning … of a nightmare.

Since that day, Reef has done all but quell her symptoms. Quite the contrary.

He’s made them worse.

This from News 10 in San Diego:

“I didn’t know what I didn’t know,” said Thompson, who soon realized that she couldn’t take Reef for a walk at the pier or the park without having him react by barking and lunging at passing dogs and strangers. There was no way she could take him through airports as she travels across the country delivering speeches.

At home, Thompson said Reef would stand on his hind legs, putting his front paws on her shoulders and attempting to mount her from behind. “As a MST (military sexual trauma) survivor, it is completely inappropriate,” she said.

The reaction from the nonprofit has been mixed. At first, their founder and president, Joan Nold, said the vet never reported the negative stories. Then she disclosed that they offered to take the lab back and retrain him — only to be told “no.”

She said that Thompson was pressed on getting Reef at an early age, despite their recommendation to wait until he had matured a few more months.

The Marine claims the org’s support — something they pledged from the start — simply wasn’t there.

“You call their one trainer, and they have up to 72 hours to get back to you. That doesn’t work when I’ve got a live animal who’s doing behaviors that are not only anxiety-provoking, but frightening.”

Since experiencing the dilemma with Reef, Thompson has started a public Facebook page on the subject. She says a bunch of other veterans have experienced the same in adopting a service dog that wasn’t properly trained.

Although the nonprofit has since severed ties with Thompson, they stand by their process, adamant that a dog is never full-trained, and that the animal and owner need to grow together, in order to form that crucial bond from which everything — healing included — is based.

The report also references a success story, from another veteran suffering from intense PTSD:

Matlock served 12 years in Air Force Special Operations, including three deployments. During the last deployment members of his team were killed in action. When he returned home he described himself as troubled. He struggled with depression and anger.

Then he contacted Labs for Liberty.

Matlock was paired with a 7-month-old black lab named Willis. Matlock acknowledged Willis was not a finished product, but he accepted that because he believed he needed the comfort of a service dog as soon as possible.

“We grew together as a team.”

According to Thompson, she’s now working with a dog trainer (free of charge) to get Reef to where he needs to be.