Poll: Americans Think This Military Branch Is Most Important

Each branch of the United States military exists because it has its own purpose — specialities and functions.

That said, a popular and highly-regarded polling outfit recently took a stab at the matter, asking citizens to pick the one they deem most vital to national security.

The answer that garnered the most tallies might surprise you.

An earlier version of the question showed the largest share of Americans naming the Air Force as most important in May 2001, four months before the 9/11 terrorist attacks, and in April 2002, after the onset of the Afghanistan War. But once the Iraq War began in 2003, with the large-scale invasion by Army ground troops, the largest percentage of Americans picked the Army in 2004, 2011 and 2014.

Here’s some more data, in chart form, from the research-based opinion company: 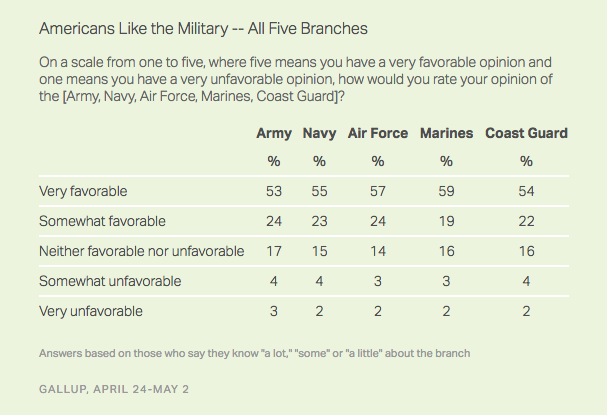