A Washington state congressman’s exaggerated military service was exposed by reporters who followed a trail of doctored photos, missing medals and vague statements.

The Seattle Times published a scathing investigation of Rep. Graham Hunt, a former Arizona Air National Guard member and Washington state representative. While Hunt was deployed to the Middle East, many of Hunt’s claims regarding his exaggerated military service were exaggerated or fictional. 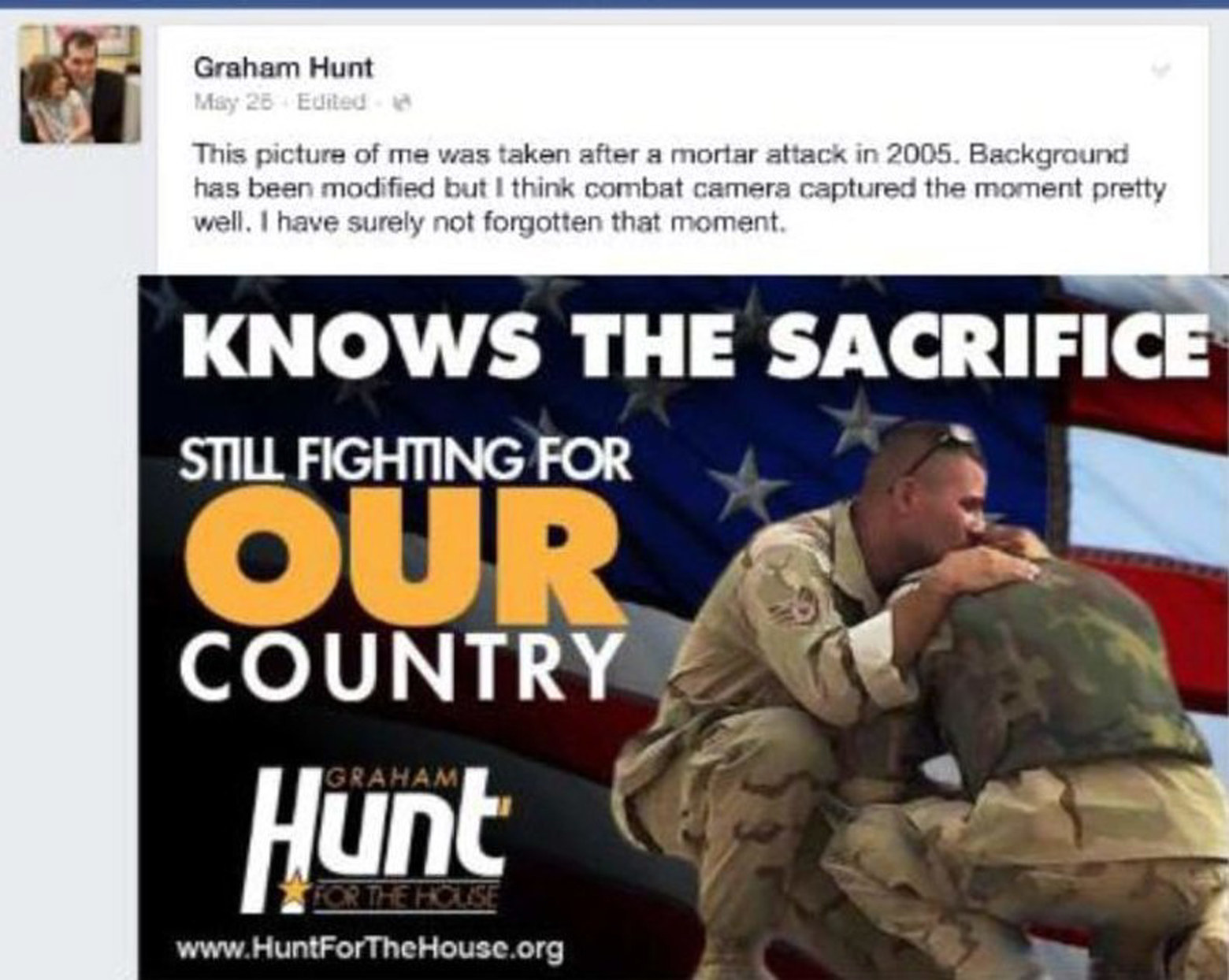 In 2014, Hunt published to his Facebook page a picture of one soldier consoling another in combat gear alongside the text, “Knows the Sacrifice, Still Fighting for Our Country” and his campaign logo. He also wrote a personal message, where he claimed that one of the men in the photograph was him.

“This picture of me was taken after a mortar attack in 2005,” the post said. “Background has been modified, but I think combat camera captured the moment pretty well. I surely have not forgotten that moment.”

Though Hunt acknowledged that the background was “modified,” he failed to mention that neither soldier in the photo was actually him. It wasn’t even taken in 2005. In truth, the original photograph was captured by an AP photographer in 2003, and it starred two military policemen from Ohio. The image was eventually removed from Hunt’s Facebook page.

Before the Seattle Times’ investigation, both Hunt’s campaign and website biographies boasted that he had earned the the Air Force Commendation Medal, the Iraq Campaign Medal and the Afghanistan Campaign Medal. However, a Washington military personnel center didn’t have any record of Hunt earning any of these prestigious medals. His biographies have since been edited to remove references to any specific award or the phrase ‘combat veteran.’

In interviews, Hunt said he did not mean to list medals he had not received and took down the references until he could find documentation. Last week, he said he’d made a mistake in listing the Iraq medal — mixing it up with a similarly named award he did earn.

Hunt downplayed the importance of the decorations. “Honestly, I don’t even care to list any honors or awards I have received, because frankly I don’t think they are that important to the public in the first place,” he said.

The same personnel center said that some military records are incomplete when a veteran fails to submit the correct paperwork. Hunt is currently searching for his own records to prove that he did earn medals of valor.

Hunt often identified himself as a wounded combat veteran on paper and in person, but when pressed for details by reporters he remained vague. He also told the paper that he receives a disability payment from the Veterans Health Administration.

“He said he was knocked down by explosions but cannot remember where,” the Seattle Times wrote. “He also says he cannot remember the names of units he deployed with to Iraq and Afghanistan.”

Unlike the other two lies busted by reporters, this one crosses into a morally grey area because it’s Hunt’s right to keep his medical history confidential. While Hunt’s vagueness regarding his war wounds is suspicious, he could still be disabled in a way that isn’t immediately obvious or visible to the naked eye.

– During his service, he achieved the rank of staff sergeant