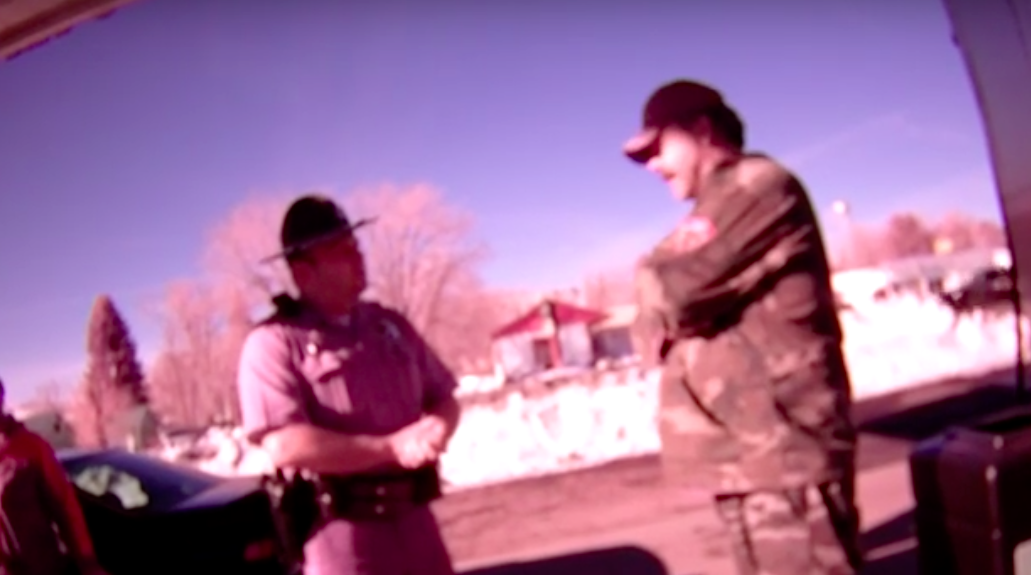 We’ve said it before and it’s certainly worth saying again, especially after viewing the following footage: the Malheur National Wildlife Refuge, now illegally occupied by a clan of misfit American “constitutional” extremists in wobbly protest, is a paltry-stocked beehive buzzing with some of the most asinine and pathetic stolen valor candidates America has seen in quite some time.

Add this fellow — 54-year-old Oregon native Joseph Arthur Stetson — to the laundry list of phonies. Unless someone has clear evidence that the man arrested in the video below wearing camouflage and whacked off his gourd from a whole lot of some kind of liquor is indeed a “retired Green Beret colonel” as he drunkenly claims? Highly unlikely though.

Taken Monday at an Oregonian gas station not far from the militia’s standoff site, Stetson can be seen threatening the lives of a whole host of police officers, including the Harney County deputy who’s super-professional during the entire encounter.

According to local reports, the wannabe-militiaman was carrying a pellet gun at the time and claimed that he intended to join the boys at the refuge to be another personal guard for the Bundy-led brigade.

The gibberish that falls out of Stetson’s mouth as soon as the troopers begin handcuffing him is the real gem of the whole “contact”.

This from RAW STORY:

As he’s being handcuffed, Stetson says, “I will kill all of you. Don’t believe me? If I go to jail, when I come out, I’ll kill you.”

As the arrest continues, Stetson can be heard speaking more angrily, saying, “I’m a Green Beret colonel, you damn sons of bitches. Freaking Nazi Germany, that’s all you are. I can’t be killed anyway.”

He then yells at a nearby state trooper that he is being subjected to an “illegal arrest” and vowing not to harm state troopers, unlike the deputies.

“I am the last hope,” Stetson yells. “I am a freakin’ colonel, Green Beret. My record is sealed by Ronald Reagan.”