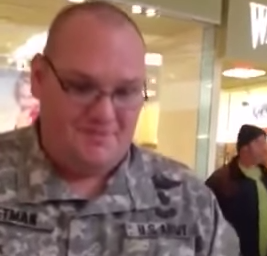 U.S. Rep. Mike Fitzpatrick is asking the U.S. Attorney’s office to investigate a Philadelphia man posing as a member of an elite military special forces unit to receive discounts on Black Friday.

Rep. Fitzpatrick was alerted of the incident after a video of Ryan Berk, a veteran from the 101st Airborne Division who served in Afghanistan calling the imposter out went viral. The video has garnered over 1.5 million views since it was posted on Black Friday.

In the video, Berk calls the man whose ribbon read “Yetman” out on several inconsistencies including his three Combat Infantryman Badges; an award you can only receive once per campaign, his flag being too low on his arm, calling his Staff Sargent when he claimed to be a Staff. Sgt and many other serious details pertaining to the military.

After Berk corrected the man on many of his questions, he yelled “Here it is, stolen valor at its finest,” as the man in uniform began to walk away. “Why don’t you just admit you’re a phony”?

Anthony Anderson, an Army veteran who runs the Guardian of Valor website, told Philly.com if Yetman received benefits from wearing the uniform it is a possibility he could be prosecuted and added no U.S. Army Ranger with three CIBs named Yetman is listed on any official record.

Watch the video to see the exchange between the two men.