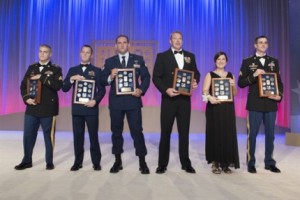 The Air Force is now accepting nominations for the 2015 USO Service Member of the Year award. This award is sponsored by the USO and recognizes specific acts of heroism by enlisted members from each branch of the military. Air Force nominations are due to the Air Force Personnel Center (AFPC) by April 1, 2015.

To nominate an individual for the USO’s Service Member of the Year award, organizations and base-level personnel must contact their major command, field operating agency, direct reporting unit or major command equivalent for nomination procedures. You may submit only one nomination.

The winning nominees will be honored at the USO’s annual fall gala next year.