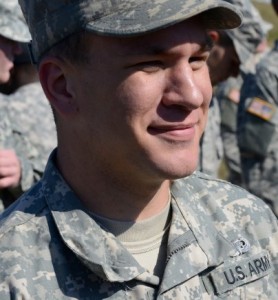 Sgt. Joseph Mille is the first lower-leg amputee to earn his Airborne wings. The U.S. Army Marksmanship Unit Soldier graduated from the Basic Airborne Course at Fort Benning, GA, on November 14, 2014. However, this is far from Mille’s first major accomplishment in the Army.

During Mille’s last month of deployment to Afghanistan in 2012, an improvised explosive device severed his right leg. After a year-long recovery process and adjusting to his new prosthetic, Mille didn’t want to leave his Army career incomplete and decided to remain on active duty. He entered and graduated from U.S. Army Sniper School in Georgia earlier this summer after successfully proving his skills in marksmanship, rucking, range estimation, target detection, rapid fire engagements, and stalking.

After graduating from Sniper School, Mille set his sights on the Basic Airborne Course. Once there, he had to learn a unique way to distribute his weight during a parachute landing fall (PLF). However, other than this, instructors treated Mille the same as any other non-commissioned officer attending the three-week course. He completed every company 3.2-mile run as well as his duties at the company and Airborne physical readiness training.

Mille’s prosthetic is composed primarily of carbon fiber, including a carbon fiber blade. He is originally from Sitka, Alaska and is a USAMU Paralympic athlete.