U.S. Signs Agreement to Keep Troops in Afghanistan Past 2014 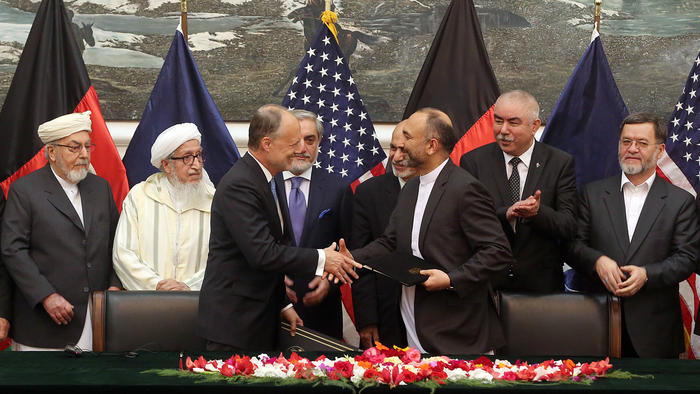 Photo Courtesy of the Associated Press

U.S. and Afghan officials signed a security pact recently that will allow 10,000 U.S. troops to remain in the country past the end of 2014.

According to the Washington Post, the U.S. and Afghanistan agreed on the language of the security agreement more than a year ago, however, Ghani’s predecessor Hamid Karzai refused to sign the agreement citing fear for Afghan civilian lives.

Under the agreement the U.S. will keep bases in Afghanistan to train Afghan soldiers and police and under a separate NATO agreement, several nations led by Germany, Italy, and Turkey will contribute a total of 12,000 troops to the force.

“I assure the nation that these agreements are in our national interest,” Ghani said in a statement broadcast live. “If needed, these agreements can change with the consideration of the interests of both sides”.

Ghani hopes the agreement will strengthen the relationship between the two governments.

President Obama released a statement saying the pact would allow both countries “to cement an enduring partnership that strengthens Afghan sovereignty, stability, unity and prosperity, and that contributes to our shared goal of defeating Al Qaeda and its extremist affiliates.”

There are currently 24,000 troops in Afghanistan.