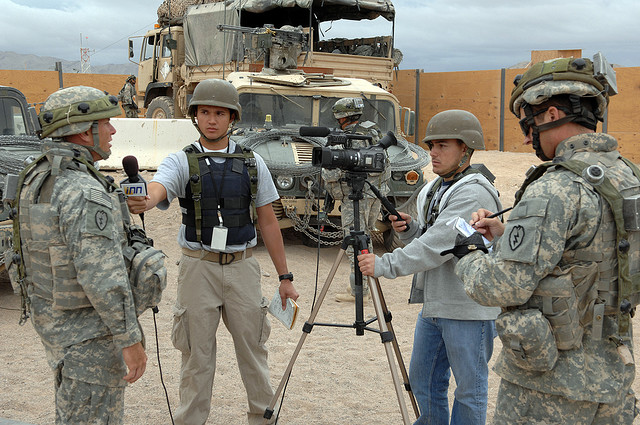 With recent events in Iraq and Syria, the number of U.S. troops deployed overseas has nearly doubled, but what’s noticeably missing are journalists on the scene.

In 2003, the Department of Defense created an embedded journalist program where 692 reporters were inserted in the U.S. invasion in Iraq. The program was designed to change the perception of national security in both the U.S. and other countries where the U.S. conducts operations.

“The Department of Defense (DOD) policy on media coverage of future military operations is that media will have long-term, minimally restrictive access to U.S. Air, Ground, and Naval Forces through embedding. Media coverage of any future operations will, to a large extent, shape the public perception of the National Security environment now and in the years ahead”

According to the Washington Post, Rear Adm. John Kirby, the Pentagon press secretary, said that after the military sets up a new headquarters commanded by Army Lt. Gen. James Terry in coming months to oversee operations in Iraq, media access could improve and accommodate short visits to interview the troops and see what is happening.

“We recognize that this is something that we need to improve upon,” Kirby said.  “It truly does come down to infrastructure”.

After troops were pulled out of Iraq in 2011, the media left with them and military advisers were sent in to evaluate the strengths and weaknesses of the Iraqi army. Given the limited amount of troops overseas at the time, the DoD could not justify an embedded journalists program.

With American journalists James Foley and Steven Sotloff being beheaded by ISIS militants this year, President Obama has ordered a review of the U.S. hostage policy –  it is expected that the military will increase its protection of media on the field.